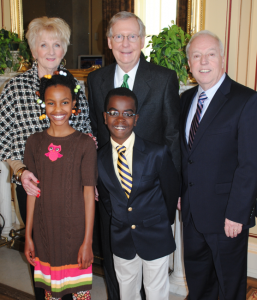 “Never has so much been written about so little.”

Ok, I’m using those exact words from Chip Hutcheson because I don’t want to be accused of saying that about his weekly, actually twice weekly, columns in the Princeton Times Leader. So those really are Chip’s words.

Actually, if I did say something about them it would be that every one of them has been entertaining. That’s Chip’s style and I know reader of the Times Leader are going to miss them.

You read it here a few months ago that come June 30, Chip Hutcheson would be retiring. Not that he’s done anything to deserve retiring, until you consider what he was done. Outside of running the newspaper, Chip’s been a KPA President. He served year before last as President of the National Newspaper Association, only the second Kentuckian to ever serve in that capacity. And a year before being NNA President, Chip was President of the Kentucky Baptist Convention.

That was a milestone in itself because seldom do Kentucky Baptists allow a layperson serve as President. KBC normally wants a minister to be in that position. But in Chip’s case, there was overwhelmingly support for him to serve as President and not be a minister.

It’s no telling how many years Chip has been involved in NNA but took it upon himself to serve as Kentucky’s main contact person for the spring Government Affairs Conferences in D.C., now known as the NNA Leadership Summit.

With that responsibility, Chip coordinated numerous trips to visit Kentucky’s Congressional delegation during the Spring conference. The purpose was to talk about issues affecting the newspaper industry that Congress could be taking up. He became well-known by most of Kentucky’s delegation.

Back to the paper. Since August, 1976, Chip has written a weekly column. That’s 2,150 consecutive weeks and why Chip says, “Never has so much been written about so little.”

Then he added Saturdays when the Times Leader became a merged newspaper and published twice a week. So that’s two columns he wrote each week. Week in, week out. And he kept the record going with the 2,150 consecutive weeks for Wednesday’s version. Before retirement lands, he’ll write two more Wednesday columns, three more Saturday columns (including one on July 1).

Chip has been involved with the newspaper industry since the early 1970s.

After graduating from the University of Kentucky, he served as sports editor of the Kentucky New Era in Hopkinsville from 1970-76, then returned to his hometown to take over as owner and publisher of The Princeton Leader following the retirement of his father, John Hutcheson, Jr.

He ran the Leader until 1992, when it and the community’s other paper, The Caldwell County Times, were purchased by the KNE group and consolidated as The Times Leader.

He has served as publisher of the Times Leader since that time.

“My decision to retire has been in the works for some time. It has been a tremendous privilege and honor for me to be involved in this community for the past 40-plus years. I have been blessed to work with so many talented, quality people over the years,” said Hutcheson.

And all of us involved in KPA have been blessed to know, work with and learn from Chip.