68 years pastoring in the same pulpit, 58 years as patriarch of the Radcliff Sentinel

At ago 90, he still preaches every Sunday and makes it into The Sentinel every day

RADCLIFF—Pastoring for 68 years is a rarity today—but very few have the distinction of pastoring the same church for that length of time. That is a distinction held by James Royalty, who will begin his 69th year at Red Hill Baptist Church in July. 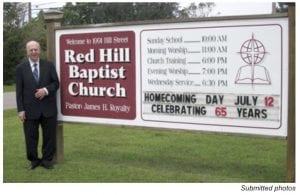 He began working as a printer since his father had a small print shop. At one time he inquired about a position with the Western Recorder in the days of “hot metal” printing. He and his family started a newspaper in Radliff, The Sentinel, which is still in family hands today.

It was at a Kentucky Baptist Convention annual meeting that he decided to accept a call to preach the gospel—a call he had struggled with for five years. “I thought that I couldn’t do it, but I went to Georgetown College and worked my way through there—it took me seven years because I worked while I went to college.

“In my calling, I said I was not a preacher, but where God wants me I’ll go, and I’ll stay as long as He wants me to stay,” Royalty said. “I had four opportunities to leave Red Hill, but I turned them all down. After all, the Lord put me there to start with. I was needed there.” He said he has no plans to retire, but to continue “until the Lord calls me home.”

He has remained as pastor in the spite of some health challenges. In 2010 he had a heart attack, then in 2015 suffered a fall, which was followed by a stroke a month later. He was in and out of the hospital for about two weeks.

He preached one of the first messages at Red Hill, which was a mission of Vine Grove Baptist. He was called as its first pastor in July 1950. Not only was he the church’s first pastor, but it was his desire to hold a series of revival services in the Red Hill community that spawned the mission work. 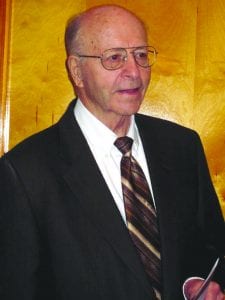 The services in those early days were held in an old, borrowed Army field tent. Vine Grove supplied homemade slat benches and an old Army pump organ was brought in to provide the music. Royalty, still in school at Georgetown, traveled to Red Hill each Sunday to preach. The planting church paid for his weekly trips to Georgetown, and the mission was instructed to incur no debt.

The mission was given a one-acre lot, and construction on a basement building measuring 19-feet by 30-feet began.

While that work was underway, services continued in the tent. But on a snowy December day in 1950, when Royalty drove in from Georgetown he found the tent had been blown down. The members had to repair the borrowed tent in order to turn it back in, and that provided the impetus to move to the basement building, which only had a mud floor, walls and a center support girder on posts. A pot-bellied stove that had been used in the tent was brought in. Construction on the basement was completed in the next few months, then work on the upstairs began and was completed in 1951. The mission was organized into a church in 1952 as part of the Severns Valley Association.

Because so many people needed transportation, Red Hill became one of the early churches to start a bus ministry, resulting in more than 40 people being served, in addition to a few who were given transportation to other churches.

More land was purchased and the church moved to its present location at 1991 Hill St., dedicating a full-service basement facility Nov. 12, 1961. Ten years later, construction of an auditorium began. It was dedicated July 9, 1972.

Red Hill has a strong legacy in missions giving. It has been the sponsor of a Laotian ministry and a Spanish ministry, and members have done volunteer mission work in Kentucky and outside the U.S.

It sends 13 percent of all undesignated gifts to the Cooperative Program and 4 percent to the Severns Valley Association.

The 90-year-old pastor offers worlds of advice to younger pastors—”Find the Lord’s work and stay with it. A problem today is that churches won’t support them so they can take care of their family. For some, it’s not that they particularly want to move, but the churches don’t support them to make a living.”

And more about the Royaltys and The Sentinel

James’ daughter Marlene shared some information about the family and the newspaper. For the last several years, only immediate family members work for The Sentinel. While James isn’t involved directly in production of the paper, he comes in for a while every day and will help with post-press work. Marlene says her dad will offer “much-needed”(and “much appreciated”) input and advice. He and his wife Opal Jean (O.J. – Jean) are the primary owners and share it with their three children.

“Interestingly, we’re a four-generation newspaper family (James’ late father once ran a newspaper in neighboring Vine Grove),” wrote Marlene. “Throughout history, Vine Grove has had three newspapers which included ‘Sentinel’ in the title.  The first one was not affiliated with the Royalty family.  The other two were.”

The story by Chip Hutcheson in the Western Recorder mentions James attending Georgetown College and then traveling home to preach on Sunday. He had another job as well, serving as a linotype operator at the Lexington Herald/Lexington Leader when those newspapers were on Short Street.

James published the first edition of The Radcliff Sentinel on May 11, 1961, and in all of those years, it’s never missed on issue.

Now Marlene notes that James “retired” from the newspaper in April, 1994. But he’s from the generation that never stops. “He just forgot (or refused)  to stop working. He’s of that hard-working generation– you know, the ‘from can to can’t’ generation.  He’s priceless!”

She also shared two columns from the newspaper’s 2018 local history series that details more information about The Sentinel.