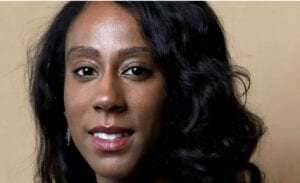 “What would I be doing right now in some sister-life where I had stayed home?” Jenisha Watts, “I look at Breonna Taylor and see myself,” The Undefeated.com

Back when Jenisha Watts went to Bryan Station High School, they didn’t have a school newspaper. Still don’t, in fact. But she loved to read and she loved to write, a book lover in a family of athletes who figured out pretty early on that journalism would be her way out, out of her Winburn neighborhood, out of Lexington, a journey imagined by many high school students in small towns and accomplished by far fewer.

In her June essay on Breonna Taylor, Watts sees herself in the murdered woman, smart, Black, determined, and by merely better luck than Breonna had, alive. She wrote that essay for the Undefeated, the ESPN website where she worked until two weeks ago as culture editor. Today, she is a senior editor for special projects for The Atlantic, one of the oldest magazines in the U.S., and in recent years, one of the most dominant and influential in journalism.

At age 35, the Bryan Station graduate is at the top of the charts in a career she chose in high school, and in a phone interview just a week before she got married, she sounded even a little conflicted about her star status.

“I think the thing is to keep having a heart in the right place, so you don’t become the story,” she said. “We do this because we want to celebrate stories, and not let it go to our heads.” But, she noted “it’s why I wanted to get into writing and editing — it’s liberating it is to be a black woman and shape how people view things.”

Because of a difficult home life, Watts mostly lived with her grandmother, Patricia Dishman, who emphasized education more than a life outside of Lexington. But for Watts the path was already clear.

“There was a spark about her,” said Regina Dills, who was a first year English teacher in 2001 when Watts took her class. She still teaches at the school. “She was a curious and driven about the world around her, but she was able to connect with people even when she was young.”

Watts went straight to the University of Kentucky to major in journalism. Although she didn’t feel particularly supported by the journalism department, she says, her ability to connect, to seek out the people who would help her, soon kicked in. She took a poetry class with Nikky Finney, who told her if she wanted to be a journalist, she had to read the works of Ida B. Wells, the 19th-century investigative journalist who battled sexism and racism even as she took on topics like lynching. She met UK law professor Melynda Price, who suggested books and articles, administrator Lisa Higgins-Hord, who helped her shape her public persona, early UK civil rights activists Bill Turner and Chester Grundy, who introduced her to more people in Lexington and beyond.

She even interned at the Herald-Leader. Her then-editor, Risa Richardson, recalled her being “so wide-eyed and inquisitive and hungry. She wanted to soak up all the information she could. She was willing to take any assignment.”

After graduation, her grandmother wanted her to stay on at the Herald-Leader and in Lexington, but Watts told her friends she was going to New York. An internship at Essence magazine turned into a freelance position, but the editors didn’t know she was still in Kentucky.

“They told me on a Wednesday I could start that Monday, so I bought a Greyhound ticket, packed three suitcases with a blow up mattress and my best outfits,” Watts said. “I was just thinking I’ll go to New York and stay for a month and then go back. The freelance gig kept extending … I never went home.”

Essence led to Time Inc. Books and People Magazine, then a stint at Columbia University to get her masters degree in journalism. She still remembers getting the acceptance letter, along with the bill for $1,000 to secure her place. “I was still a struggling journalist and I did not have the money, but my mentors gave me the money.”

She went to ESPN, then the Undefeated, and now the Atlantic. Oh, and she’s also working on a book, a biography of Charles Stevenson Wright, a Black novelist in New York. She just got married in Washington, D.C., where she now lives, last weekend.

Watts doesn’t get back to Lexington that much, but she understands that she’s a role model for other young Black women who want to make it as big as she has. A few days after we talked, she sent me an email because she couldn’t stop thinking about advice she would give.

“I’d also tell them that they ‘belong’ in any room and to borrow from Maya Angelou, ‘their crown has been bought and paid for,’” she wrote. “Don’t shrink. Have integrity and believe in you. Keep a tight circle who can always remind you who you are and why you are doing what you are doing. BECAUSE There will be a lot of days when you question yourself, wish you had a different family background and would likely threaten to quit … but those are the moments when you are really close to that thing you wanted and you realize why a positive tribe is a life line. Just keep reading, keep believing and keep working. I promise it will pay off. I promise. Because if a girl with a funny name from Kentucky can work at some of the best journalism publications… it’s so cliche … but it’s possible for you too.”