Advertising a Maker’s Mark Bottle: Is it full or empty?

KPA Board member Kellie Cracraft emailed Tuesday with a question. A gentleman wanted to advertise he had a Maker’s Mark UK Commemorative Bottle for sale. He wanted to put that ad in the Maysville Ledger Independent.

Kellie asked if that was legal and since the Alcohol Beverage Commission is across US 127, I went to the experts. 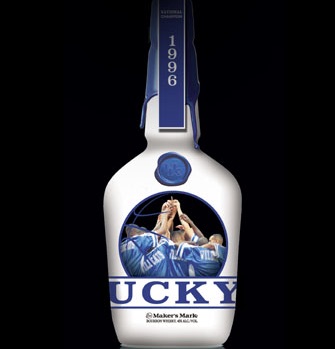 This was probably one of the bottles signed at Keeneland by some of the 1996 UK National Championship players or maybe it’s one the gentleman had been holding on to for a while. I’m sure with the UK players’ signatures on the bottle he was seeing $$$$.

If the bottle still contains any of its original contents, absolutely not, unless the guy is a licensed liquor store retailer. If it has the contents still inside, not only can he not sell it, but it cannot be advertised for sale.

If the bottle is empty and he’s selling just the bottle, it’s perfectly legal.

So if you get a reader wanting to sell an alcoholic beverage bottle, make sure they chug-a-lug it before you advertise it and before they sell the bottle.