After a year ‘off’ because of COVID, press association executives gather for 2021 convention 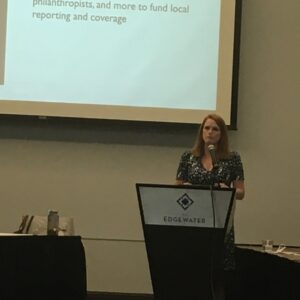 Founded in 1923, NAM is a coalition of state, provincial, regional and national North American trade associations serving the newspaper industry.

Julia joined the Kentucky New Era in Hopkinsville fresh out of college as a reporter. She was there from 2007 to 2010, serving the last year at news editor.

She won the Best Investigative Story/Series in the 2008 KPA Contest for a story about the Oak Grove Police Department. She and KNE editor Jennifer Brown participated in a 2009 KPA Winter Convention program, moderated by Al Cross, on “How they did it – how papers did big reporting projects.”

Julia still has her fingers on the pulse of newspapering in the Bluegrass. She’s currently Hoptown Chronicle’s (hoptownchronicle.org) engagement editor and has been involved pretty much since the start of this news outlet. Her good counsel convinced Jennifer Brown in the spring of 2019 to apply for 501(c)(3) status. She designed the Chronicle’s website and also reports and edits local stories, and she advises the Hoptown Chronicle board members on donor relations.

Julia also collaborates with Jennifer on the Chronicle’s coronavirus coverage. Jennifer sent me a story we published this weekend about the next threat to nursing homes as an example of Julia’s involvement with the Chronicle.

State press association executives from across the U.S. and Canada were in Madison WI last week for the 98th annual Newspaper Association Managers convention.