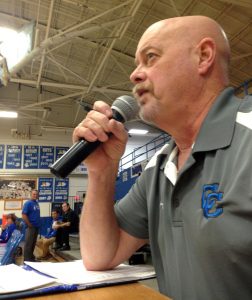 Clinton County News publisher Alan Gibson has been moonlighting now for 42 years as the public address announcer for Clinton County athletics. Seems he’s putting in about as much time as he does publishing the Albany weekly but the assignment came with an extra benefit this year.

“Since I’m on the staff and at the official table, I was included in last week’s 1b round of COVID vaccines for school personnel.” For all the time he puts in amid a season unlike any other because of COVID, he says, “That’s the one positive.”

“We’ve already played more games than I thought we would by the end of the season.  We’ve only had a couple of games with COVID-19 postponements. Was able to make both up later.  The season is a scrunched up mess, though.  I’m in the gym four nights this week and it doesn’t slack up much going forward.”

Alan received the 2019 Lifetime Achievement and Service Award, given out by the Kentucky Association of Basketball Coach (KABC). The presentation was made at Rupp Arena during the boys high school state tournament as couple of years ago.

It was the second time Alan had been honored by high school basketball. In 2012, he received the Rudy J. Ellis Distinguished Service award given out by the Kentucky High School Athletic Directors Association.