All newly elected, appointed public agency officials should have Your Duty Under the Law by now 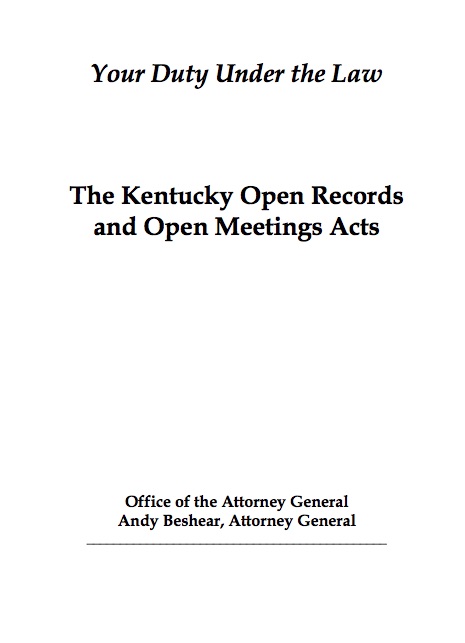 Thanks to Sharon Burton at the Adair County Community Voice for asking about this issue. Seems she was having a discussion that turned into a disagreement with some Columbia city officials. Apparently they didn’t know about the law, don’t pay any attention to it or didn’t realize they were charged with making the pamphlet available.

But that email from her reminded me to remind you about “Your Duty Under the Law.”

Has the city, county, school board, ethics board, and every other public agency in your county distributed the pamphlet, Your Duty Under the Law, as prepared by the Attorney General? Easy way to find out is ask the clerk of that agency for the signed receipt of each elected or appointed member of the public agency.

Got a young, as we used to call them “cub,” reporter, who might need a little experience in requesting a Open Record? Here’s an easy assignment that will get them introduced to Open Records and how to ask for something.

It’s been 60 days since newly elected/newly appointed public agency members took office. State law requires that within the first 60 days of a term, the head of the public agency must give each new member a copy of “Your Duty Under the Law.” And the law requires that each member must sign a receipt that he/she has received the copy. Unfortunately, we can’t make them read the pamphlet but at least they must acknowledge receiving it.

So send that reporter down to the mayor’s or city clerk’s office, or to the Judge Executive’s or county clerk’s office and ask for copies of the receipts from the ones who just began their terms. And remember, some of those being asked are going to be new to the office as well.

Below this is a list of those agency heads who are charged with distributing the report to agency members. Make sure they are doing what they are required by law.

This law was put into place in the 1990s from action by Reg. Derrick Graham, D-Frankfort. Actually, he wanted to go one step further and make each elected/appointed member sign documentation that they had READ the documents. The Kentucky Municipal League as it was then known, and the Kentucky Association of Counties objected. They asked that the pamphlet be made available and each member would sign they had read it. But the two groups said public agency members didn’t have time to read the pamphlet right off the bat. So the language was changed to require each member sign a form he/she had received the pamphlet as prepared by the Attorney General.

Working with the University of Kentucky School of Journalism and the Scripps Howard First Amendment Center, the Attorney General’s Office has prepared a video that may also enhance public officials’ understanding of the Open Records and Open Meetings laws. (Click on the video link to see the message from AG Jack Conway with an explanation of the responsibilities of public officials.

Here’s a portion of the Attorney General’s notification to all agencies about disseminated Your Duty Under the Law:

Since 2005, you have received a packet of materials from the Office of the Attorney General relating to the Open Records/Open Meetings Acts and records management. The Attorney General distributes this information under an assigned duty codified at KRS 15.257. Pursuant to companion legislation found at KRS 65.055(1), 160.395(1), and 164.465(1), you are required to discharge the following duties on a continuing basis.

You must distribute Your Duty Under Law (PDF) and Managing Government Records (PDF), either electronically or in hard copy, to each newly elected official or elected or appointed member, as described below, within sixty days of the day their term of office begins. The distribution may be by electronic means​.

For County Judge/Executives, Mayors, City Attorneys, County Attorneys, this includes “each elected official and each member, whether elected or appointed, of every county and city legislative body, local government board, commission, authority, and committee, including boards of special districts.”

For Superintendents of Public School Districts and School District Attorneys, this includes “each elected school board member and each school based decision making council member.”

For Presidents of State Postsecondary Educational Institutions and University Counsel, this includes “each board of regents or governing board member of their university.”

You must obtain signed proof from each official or member that he or she received the documents.

Provide him or her with a copy of the Proof ​of Receipt (PDF).

Return only Certificate of Distribution to the Attorney General

You must return only the Certificate of Distribution (PDF) to the Office of the Attorney General after the lower portion of the certificate is completed.

Mail the Certificate of Distribution, to: