Amid pandemic and protests, Americans know much more about their rights

PHILADELPHIA – In a period defined by an impeachment inquiry, a pandemic, nationwide protests over racial injustice, and a contentious presidential campaign, Americans’ knowledge of their First Amendment rights and their ability to name all three branches of the federal government have markedly increased, according to the 2020 Annenberg Constitution Day Civics Survey.

Among the highlights of the annual survey, released before Constitution Day (Sept. 17): 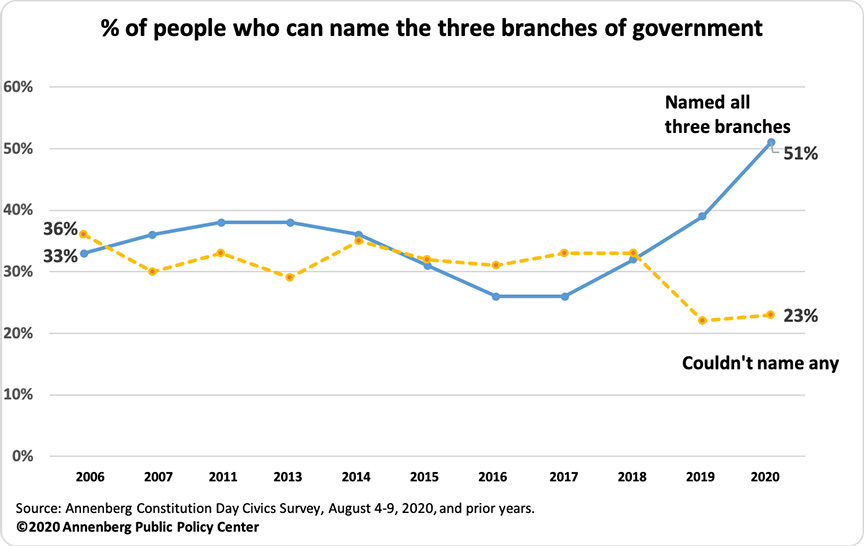 The civics knowledge survey by the Annenberg Public Policy Center (APPC) of the University of Pennsylvania was conducted among 1,009 U.S. adults from August 4-9, 2020, prior to the political conventions. It has a margin of error of ± 3.6%.

“Divided government, the impeachment process, and the number of times political leaders have turned to the courts probably deserve credit for increasing awareness of the three branches, while controversies over the right to peaceably assemble, freedom of religion, and freedom of speech may have done the same for the First Amendment,” said Annenberg Public Policy Center Director Kathleen Hall Jamieson.

This upturn in unprompted recall of First Amendment rights is consistent with increases seen in 2018 and 2019 surveys by the Freedom Forum. (For details, see the Appendix.) 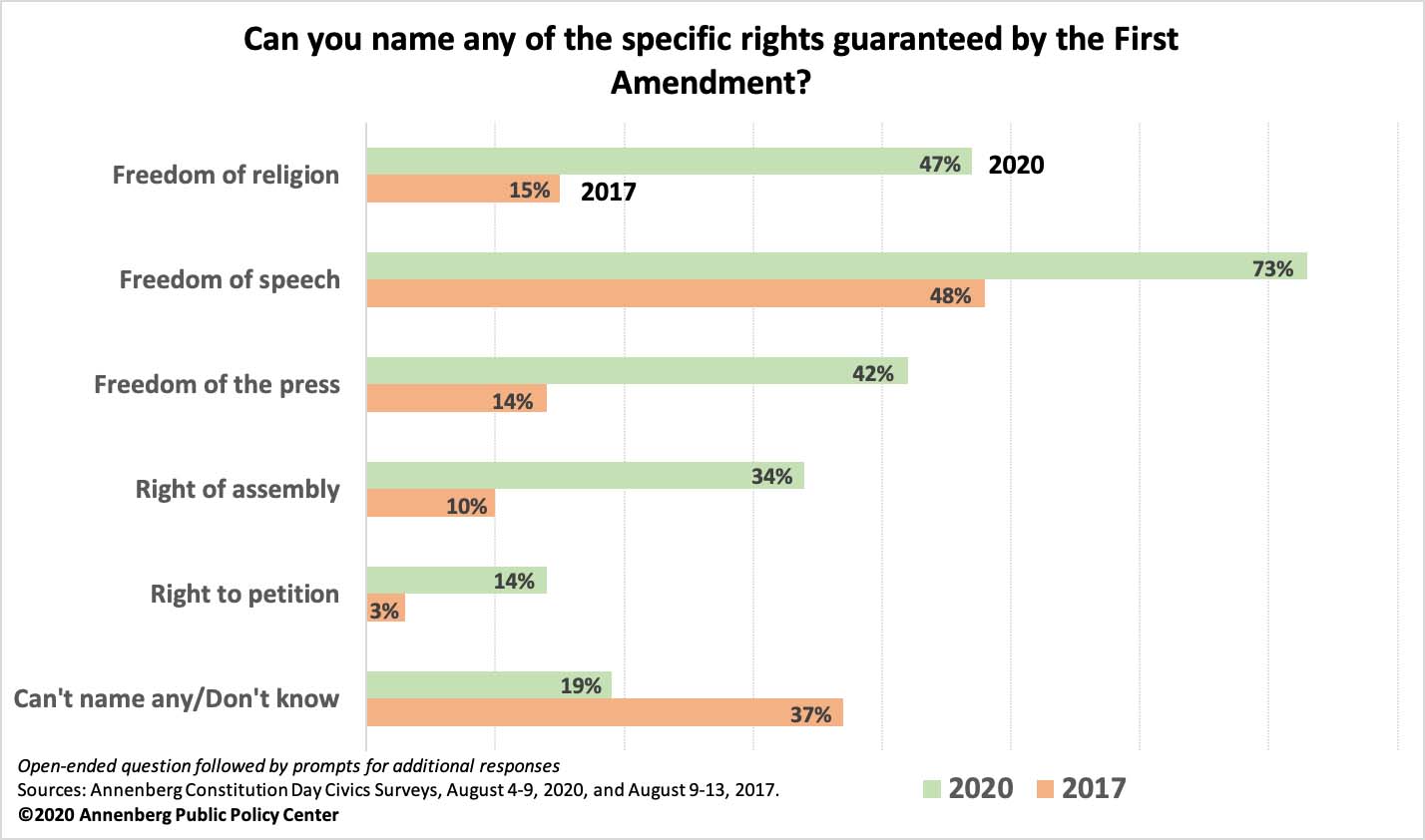 Over half can name the three branches
This year, an unusually high 51% of the U.S. adults surveyed could name the three branches of government – the executive branch (White House), the legislative branch (Congress) and the judicial branch (Supreme Court). That compares with 39% in the 2019 survey, which was the high point in 10 prior surveys, since 2006, in which APPC asked this question. In addition: 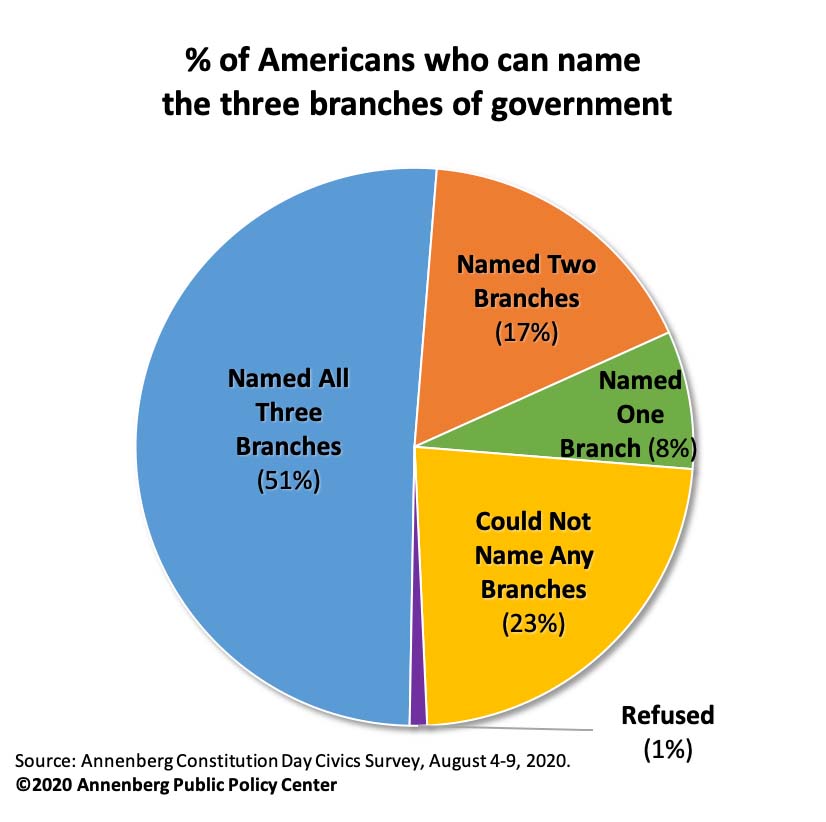 “The actions of the court in the past year appear to have effectively signaled that the justices  who cast the decisive votes were guided by the Constitution, laws, and facts of the case more so than by which political party would applaud the outcome,” Jamieson noted. “The public probably got that signal from the widely covered rulings that upheld the Obama administration’s Deferred Action for Childhood Arrivals (DACA) program and the one written by Justice Gorsuch and supported by Chief Justice Roberts that held that the 1964 Civil Rights Act protects gay, lesbian and transgender employees from being discriminated against by employers because of sex.”

When asked what it means when the Supreme Court rules 5-4 on a case:

Constitution Day and civics
The Annenberg Constitution Day Civics Survey was conducted for APPC by SSRS, an independent research company. For the question wording and other data, see the Appendix.

The Annenberg Civics Knowledge Survey is released by APPC for Constitution Day, which celebrates the signing of the Constitution in 1787. APPC’s activities to enhance civics education include Annenberg Classroom, which offers free classroom resources for teaching the Constitution, and the Civics Renewal Network (CRN), a coalition of over 30 nonpartisan, nonprofit organizations seeking to raise the visibility of civics education by providing free, high-quality resources for teachers.

CRN offers a Constitution Day Teacher Toolkit for classrooms. Annenberg Classroom recently released the video “Freedom of Assembly: National Socialist Party v. Skokie” about the First Amendment right of the people “peaceably to assemble,” through the lens of the landmark U.S. Supreme Court case over the right of neo-Nazis to march in the Chicago suburb of Skokie, Ill.

The Annenberg Public Policy Center was established in 1993 to educate the public and policy makers about communication’s role in advancing public understanding of political, health, and science issues at the local, state and federal levels.