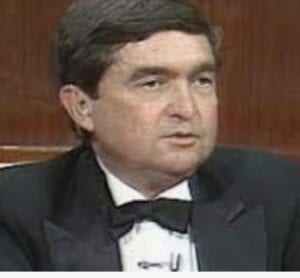 Kansas City, MO — Andrews McMeel Publishing (AMP) has acquired worldwide rights to Jane Wolfe’s biography of Burl Osborne, former chairman of The Associated Press and publisher of The Dallas Morning News, who waged and won one of the last great newspaper wars in the United States. Publication is slated for May 2022.

Burl was a native Kentuckian (born in Letcher County, Al Cross recalls) and served as publisher of the Owensboro Messenger Inquirer when the Daviess County daily was owned by Belo Corporation.

The book, currently untitled, tells the riveting story of Burl’s unlikely rise from the coal mines of Appalachia to the pinnacle of journalism — a remarkable feat considering doctors told him at an early age he wouldn’t live past his teens.

Suffering from kidney disease he developed as a child, Burl pioneered home dialysis treatment and became the 130th person to undergo a live kidney transplant in 1966 — a high-risk and unproven operation at the time.

Burl distinguished himself early as a writer and reporter with The Associated Press, eventually rising to the top of the wire service’s executive ranks. Then, against the advice of his colleagues, he sought an even greater challenge: Joining The Dallas Morning News to lead the fight against rival newspaper Dallas Times Herald. At the time of his death August 15, 2012, Burl also served on the board of Andrews McMeel Universal (AMU), parent company of AMP.

“Burl’s story is personal for us, and we are honored to be publishing it,” said Hugh Andrews, AMU Chairman. “Jane’s biography immerses readers into the improbable and extraordinary life of a man at the forefront of medicine and the golden age of journalism. He was an exceptional executive, and individual; readers will be fascinated by his remarkable journey.”