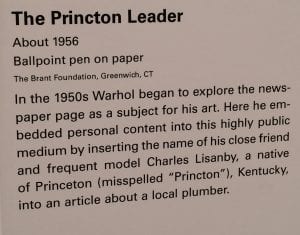 Who would have ever thought that Andy Warhol started a new art form, based on newspapers, and used The Princeton (KY) Leader as his model. That news developed this week with an email from Regina Catlett of the Sturgis News/Sebree Banner, and then confirmed with KPA Past President Chip Hutcheson, retired publisher of the Princeton twice-weekly.
Both of their families have been involved in ownership of The Princeton Leader — now the Princeton Times Leader, of course — over the last 120 years or so years. When Regina’s family owned it, the paper was called the Twice-A-Week Leader. Chip’s parents purchased the Leader in August, 1949.
And who would have known that newspaper — though referenced in Warhol’s art form as The Princton (sic) Leader — was the first weekly newspaper to join the Associated Press. And according to its own website, the Times Leader was the first non-daily newspaper in Kentucky to have a website, originally launching online in 1996.
Rather than trying to rehash and paraphrase the emails from Regina and Chip about this, I’ll let them relay the information in their own words. Regina did send some jpgs of Warhol’s art form using The Leader and one of those is included in On Second Thought along with information as stated with the exhibit.
First, from Regina Catlett: 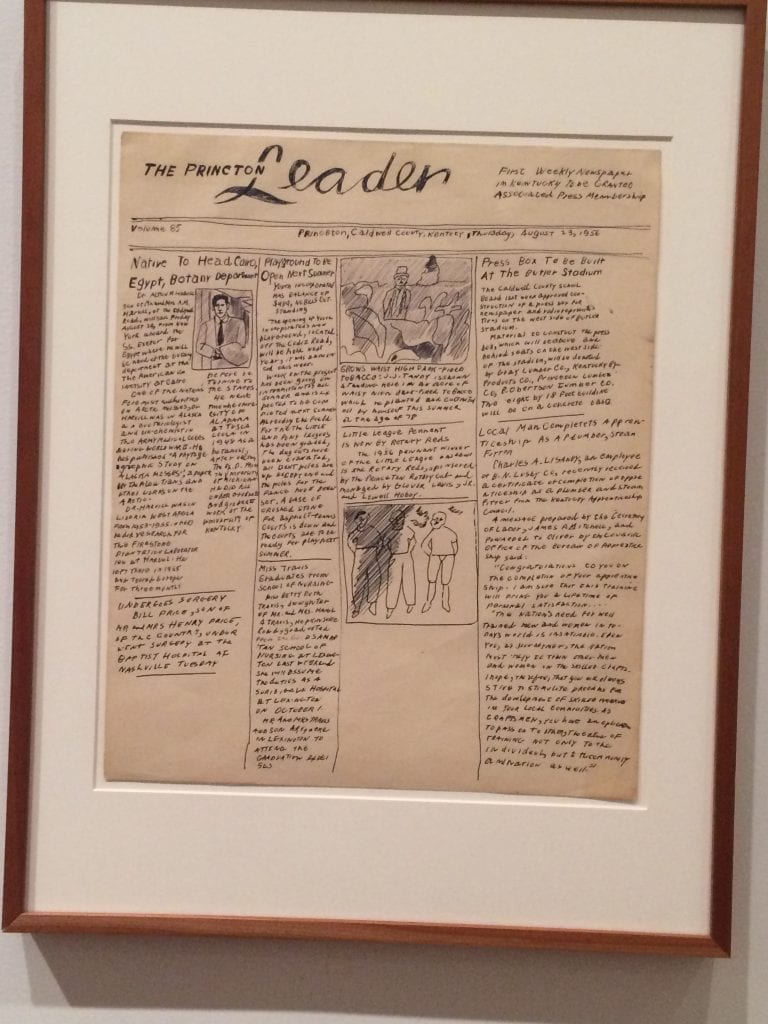 I just received an interesting email from my cousin who lives in the Chicago—She had visited a special Andy Warhol art exhibit there and found that in 1956 Warhol explored newspapers as a new form of art.  She sent me pictures of sketches he did of The Princeton Leader to see if I remembered anything about the Warhol connection.  It seems Warhol was a really good friend of a Princeton man Charles Lisanby–I remember hearing about Lisanby, and for some reason I think he might have been a high ranking military officer–I’m going to check my Caldwell County history.  The hand drawn front page of the paper says The Leader was the first weekly newspaper in Kentucky to be admitted as a member of the Associated Press.
I am sending you a jpeg of what she sent me.
Just a little something that makes me want to do research even though this would have been after my dad’s family sold the Leader…
There is some interesting information about how Lisanby and Warhol met and about their friendship–anyway–I just thought these drawings were kind of neat–especially the story about Lisanby being a plumber. What it does tell me is that the Princeton Leader was likely sent to Lisanby (maybe by his parents) while he was living in New York and Warhol read it or saw copies of it; thus, drawing his inspiration for a new art form…
My grandfather, his sister and brother owned the Twice A Week Leader–my dad worked there as a child and a young man and that was the driving force behind his going to Linotype school when he got out of the Navy following World War II.

And now from Chip Hutcheson:

I first learned about this when a young man from Princeton was in New York and saw it in an exhibit there. Then this past spring, Mallory Hancock Lawrence, who owns Hancock’s Neighborhood Market in Cadiz, was in New York and saw a Warhol exhibit and texted me a photo of what is shown in Regina’s email. It doesn’t seem possible that Warhol would have replicated a front page of a community newspaper in Princeton, Ky.

The Catlett family owned the paper from around 1902 until it was sold to Gracean Pedley (a past president of KPA) in 1940. It was known as the Twice-A-Week Leader until the sale in 1940 when Pedley converted it to a weekly and changed the name to The Princeton Leader. My parents bought it from Pedley in August 1949. I then took over the operation in August 1976. So this drawing was during the time my dad operated the paper.

You’ll notice that Princeton in the masthead is misspelled.

Charles Lisanby and Warhol were reportedly “close” friends. Charles Lisanby was an acclaimed set designer, won 3 Emmy Awards and was inducted into the Art Directors Guild Hall of Fame. Regina is thinking of Jim Lisanby, a relative of Charles Lisanby, who retired as an admiral in the Navy.

Charles was a native of Princeton. He died in 2013 at age 89. He was a pioneer in scenic design in the early days of color TV.

Also, that is correct that the Leader was the first weekly newspaper in Kentucky to become an AP member. If memory serves me correctly, that was during the Pedley ownership and continued with my dad.