Another 1929 contest trophy shows up 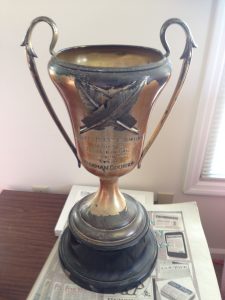 A couple of weeks ago, I had a picture of three trophies the Anderson News had won in 1927, 1929 and 1930. These were from KPA contests back in those years.

Last week, getting ready for the 150th Anniversary committee meeting, I went in search of an old photo from the early 1900s of folks who attended a KPA Convention. I would guess there were a lot more people at that convention than typically attend these days.

Not being able to find it, I sent Rachel and Bonnie on a scavenger hunt. That picture is here someplace but they had no luck finding it. However, in an upstairs closet, they did some back with a relic.

It, too, is a 1929 contest trophy that was originally presented to the Hickman Courier. It’s inscribed:

Present-day plaques might be a little cumbersome to carry around, but this trophy weighs a little over six pounds. We’ll make sure the trophy gets to the Hickman Courier so it can be properly and proudly displayed.