Are printed papers going the way of Sears and Macy’s?

There are commonalities and that could be a good thing

The March edition of FORTUNE magazine forecasts a difficult future for America’s department stores. From total sales of $230 billion in the 1990’s. the figure dropped to $155 billion last year. “But big chains continue to command loyalty from older shoppers,” reports FORTUNE.

It is not the first-time department stores have floundered. According to the 2015 book From Main Street to Mall, predictions of the death of the department began in the 1930’s.

Management jump-started department stores by moving to the suburbs when malls blossomed in the 1950’s. They did it again by focusing more on fashion when women invaded the work force in the 1970’s. Most recently we’ve seen department stores attempt to survive through mergers, consolidation and the closing of poor producing locations. Macy’s, Penney, Kohl’s, Dillard’s and Sears (which also owns Kmart) have together closed 750 stores since 2013.

The problem is obvious. Shop almost any mall and you’ll find a Sears, Penney, Kohl’s and Macy’s – or other well-known department stores – all under one roof selling the same brand merchandise.

According the Jeff Gennette, new CFO at Macy’s, department stores will have to ramp up and offer new and exciting services and experiences to survive.

There was a time, around the 1930’s, when department stores were at their apex, that they offered exciting reasons to be there. Saks Fifth Avenue had an indoor ski hill. Other stores offered dance lessons and hosted afternoon tea dances. Almost all large stores had elegant tea rooms on their top floor.

Many marketing experts think that salvation for the department store must be centered on being more social and interactive. They suggest weekly cooking classes, workout centers and members-only social clubs where there were once tea rooms.

Department stores may have lost the current battle, says one knowledgeable source, but “with ingenuity they may have the time and resources to win the war.”

A parallel for print publications

I remember when I started in the publishing business working with an editor who prided himself on being able to write an entire front page in less than an hour. But none of the stories were longer than a paragraph or two. Most were written without notes and were quick reflections on the various events and happening in our small community. Every piece included the name of at least one local resident. 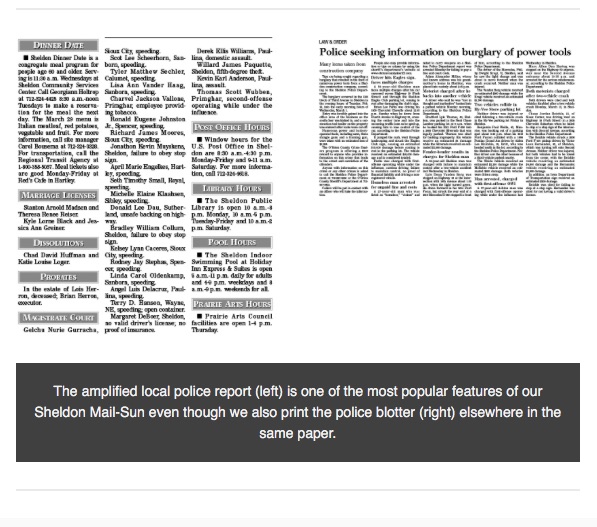 My daughter-in-law, our publishing company’s Vice-President of Operations, suggested recently that we promote our local hometown Sheldon Mail-Sun as “The Community’s First Social Network.” Perhaps our smaller community papers lost some of our readership base when we began to emulate our daily metro market brethren. Maybe our subscribers don’t want so many pages of investigative stores, discouraging news reports and over-written personality pieces. Maybe we can make our papers a bit more social without becomes archaic. I’m not suggesting a return to items like who had Sunday dinner with who but more acknowledgement of the members of our community would surely be appreciated in today’s Snapchat, Facebook, Twitter world.

Pictures and comments from the Boy Scout weekend campout, for example. Every parent, grandparent and troop sponsor would like that.

Pictures of the community’s various church confirmation classes and the printing of submitted pictures of first birthdays are other ways to reconnect with the reader. The publishing of school award winners – from speech and music to academics and sports are two more. I regularly read one paper that weekly publishes the score of every member of the town’s bowling league. It takes up almost an entire page but includes the names of over 200 potential readers and subscribers.

If department stores are being told their future lies in returning to being more social, might that also apply to community newspaper?

But let’s not stop there. Are there ways we can put contests and interaction back into our papers? Remember how earlier generations regularly ran subscription contests? They didn’t just do that to increase circulation. It was a way to get the entire town talking about them. How about newspaper Bingo or something as simple as free movie tickets to subscribers who find their names “hidden” in the pages of the paper?

I see endless free single sheet publications in restaurants when I visit other communities. Most have little to read except quotes and tidbits from some fact book. But they are full of ads and are read over the noon hour hamburger, salad or slice of pizza.

Like the chain department stores we need to make reading the paper personal and fun as well as informative and credible. Then, like the department stores, “with ingenuity (and commitment) we can still win the media war.” We survived the advent of radio and television. We can also survive the age of social media. In today’s world the printed paper still reaches more community decision makers than any other traditional or digital news source.

Peter W. Wagner is founder and publisher of the award winning N’West Iowa REVIEW. He is a regular presenter at State Press Association Conventions and Group Seminars. You can contact him regarding his “We Have Seen the Enemy and He is Us” program on the future of the printed paper at pww@iowainformation.com or (cell) 712-348-3550.