From the Owensboro Messenger-Inquirer 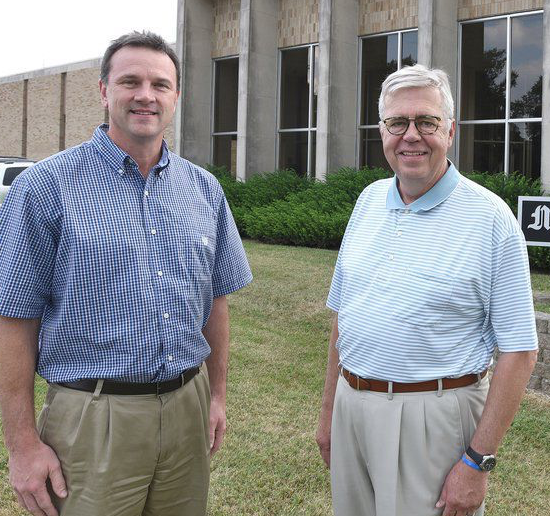 Mike Weafer, left, has been named publisher of the Owensboro Messenger-Inquirer, succeeding Bob Morris who has announced his retirement.

Messenger-Inquirer General Manager/Advertising Director Mike Weafer will assume the post of publisher for the Paxton Media Group newspapers based in Owensboro next year.

He will replace longtime Publisher Bob Morris, who announced his retirement earlier this month effective at the end of the year. Morris says he plans to spend more time with family and refocus on his passions — photography and local nonprofit organizations.

Weafer, 52, has been at the M-I since he was 19, working part time through college as a proof runner. During predigital days, papers relied on eager young men and women to ferry daily advertisement proofs between the advertisers themselves and those individuals tasked with writing or designing them.

The experience, he said, sparked an enthusiasm for the newspaper production process.

“Newspapers have a way of getting in your blood,” he said. “You ask people who work here, and it’s just something you hear everybody say. All of the different aspects of this — and there are many to putting together a newspaper — are so intriguing. It’s different and exciting every single day.”

Born and raised in Owensboro, Weafer graduated from what was then Brescia College in 1987 with a degree in computer science. He became the Messenger-Inquirer’s first computer programmer and then classified advertising manager. Later, he would lead the transition to a solely computer-based production system. He was named production manager in 1997.

A decade later, Weafer’s energy turned toward other Paxton papers as operations manager, and he helped build a new production center in High Point, North Carolina. He assumed the role of general manager in 2013 and absorbed advertising duties last year.

Many of his early promotions revolved around how computers and new media technologies could be used in news production and delivery processes. As publisher for the 12 newspapers in Kentucky, Indiana, Illinois and Tennessee that form the Owensboro Newspaper Group, he said he recognizes how that has changed the newspaper landscape, but he sees promise in the dual model the group has embraced.

“We will continue to enhance our print and digital products, so that people really have a choice, as they do now, to read on either platforms,” he said. “There are a few in the industry who have tried to abandon print and go entirely online, and it has not really proven to be that successful. Instead, we will continue to do things that make us able to do our primary job as well as we can. That is, to have the resources to cover the news in our communities in an in-depth way, providing the level of journalism readers want and the distribution vehicles that our advertisers want. We have to do both. And most of all, we’re not going to abandon our primary purpose, which is to cover the news in our communities, and provide a product for our users and advertisers that reflect them.”

The future for the newspaper group, he said, is bright. Despite setbacks felt across the industry, Weafer said he believes an appetite for news will remain strong. Community newspapers, he added, are poised better than any to meet those needs with fearless, honest and balanced reporting.

His entrance into journalism and publishing came later, after four years working with the Kentucky attorney general’s office in Frankfort. Next, he went into business with his brother-in-law at a 100-year-old printing company owned by his wife’s family. Morris joined The Paducah Sun in 1983 in the sales department but quickly grew to lead the Sun Publishing Co., which would find industrial clients across the United States. As the family-owned newspaper company began to extend its reach, he was named publisher of The Madisonville Messenger in 1995 and later The Daily Star in Hammond, Louisiana, in 2000.

He has served as Owensboro Newspaper Group publisher for 13 years, adding 60 new jobs to the community and helping lead an effort that would grow the company’s community-driven approach to news. During his tenure, Owensboro was selected to be home for two separate production hubs for Paxton Media Group. A graphics hub builds advertisements for papers throughout the company, and the pagination hub designs news pages and edits content for papers in Kentucky, Indiana, Illinois, Tennessee, North Carolina and Georgia.

His first taste for newspapers is reflected in a photograph he recently uncovered, which depicts him rolling newspapers on the front porch of his childhood home in Paducah. It was the start of a 50-year relationship with century-old Paxton Media Group. That relationship, he said, has been rewarding in so many ways.

“I can’t say enough about my appreciation for the Paxton family and for the opportunities that they have given me over the years,” he said “They’ve been in this business for more than 100 years — the same family in its fifth generation now. It’s an incredible newspaper family. This has been an incredible ride and experience for me. Anytime you get to this point where you’re looking at retirement, you start looking backward, and I’m remembering all the co-workers and friends I’ve had the opportunity to work with. More than anything, one of the things I’m most proud of is the fact that I’ve been able to work with some really true professionals here in this building in Owensboro. I’m so grateful for those experiences.”

Morris considers himself a “professional amateur photographer,” and he wants to grow those skills while reading, writing and traveling with his wife, Sue Ann. The couple have two adult children, Evan Morris and Katie Alexander, and four grandchildren in Louisville.

But Owensboro, he said, will remain his home. He and his wife have fallen in love with the community and its people, and he’s excited to watch it continue to grow and thrive. As for the Messenger-Inquirer, he added, and all the papers in the group, even better days are nearly guaranteed.

“We’re going to be in great hands. Mike is more than well-prepared to step into this role. He’s got the background, the intelligence and the strength, and plus,” he chuckled, “he’s an Owensboro guy.”