• Got demographics? If so, ad agencies are asking for information on who reads newspapers

• Fall Chapter Series just about three weeks from launch; get signed up TODAY!

For both News and Advertising, it’s almost CONTEST TIME in the Bluegrass!!

For the first time in at least 30 years, maybe even KPA’s 114 years, we’ll have two major contests going on at the same time.

So now, both sides of the building will be receiving information in the next few days about the contest. And both will have a deadline to enter of Friday, October 18. And both will be entering through the KPA electronic entry process.

There is a different entry period on the Advertising Contest since we’ve already done one ad contest this year. The advertising folks will find their entry period to be January 1, 2012, through September 30, 2013. Then beginning next year, the entry periods for both contests will be October 1 through the following September 30.

The Advertising Excellence in Kentucky Newspapers will be presented Thursday, January 23, at the Hyatt Regency Downtown in Lexington. The banquet will be at 7 p.m. (Eastern) with a reception preceding.

The Excellence in Kentucky Newspapers – 2013 winners will be announced Friday, January 24, same place, same time for the reception and banquet.

Both contests will be almost identical to the last one you entered with the possible addition of one new category in each. We’re working on language and with the division officers for News Editorial and for Advertising on incorporating a category that shows use of “social media” or “multimedia.”

Which increase would you pick: 15 percent or 25 percent?

Kind of a no-brainer if you ask me. But if you’re dealing with/involved with health insurance at your plant, you might want to check into your options.

Our renewal date for ages has been March 1 of each year. When that time came this year, we discussed with our agent a plan of “renewing” late in the year, buying several more months at a lower rate that would let us avoid the large increases expected January 1, 2014, when the Affordable Health Care Act kicks in.

And turns out that the plan was the right one, unless “Obamacare” is repealed.

We received information from Anthem in the last few days that the KPS policy for staff had two choices:

• Renew on December 1, 2013, at an estimated 15 percent increase and then renew each December 1 in future years; or,

• Stay the course with a March 1 renewal and the increase would be 25 percent, all because the new law would then be in effect. So for the staff, the first renewal of the Affordable (?) Health Care Act would have meant paying 25 percent more than the current rates come March 1.

We chose the former and have signed paperwork to have the renewal come December 1. It’s possible the increase could be less than 15 percent, that remains to be seen. But the known fact is, we would have faced 25 percent come March.

And in talking with our agent, even the 25 percent increase would have been bargain. He relayed to me that he’s dealing with some groups that are facing a 106 to 181 percent increase on their 2014 renewal. All because of, repeat after me, “Obamacare.”

So check with your company’s agent or health care provider about having a late 2013 renewal to stave off the revised plan for one year and see what your difference would be. It might be worth a second renewal this year (assuming you’ve already had one renewal in 2013) than what you’ll face in 2014.

It won’t happen today or Sunday, but within the next few days we’ll hit the 25,000 mark in stories and editorials scraped or written by David Greer for the Kentucky Press News Service. We’re at 24,793 as of this morning’s budget.

I had the pleasure last Friday of discussing KPNS with my state, regional and national press/newspaper association colleagues from the U.S. and Canada. Indiana has one and Ohio has a limited version with just the eight largest dailies participating in its OHNO — Ohio Newspaper Organization — so the story we had to tell was quite impressive.

One press association colleague said it appears Kentucky Press “is always pulling a rabbit out of its hat” to help member newspapers.

New neighbor in the neighborhood

If you’ve been to KPA since November 1, 1991, you know we’re in a townhome/condo association area with nine almost identical buildings. The only difference being some (like ours) have three floors, the others have two.

And now all nine buildings are again occupied with KPA Associate member, The Kentucky Monthly, moving in while I was out of country. I had talked with Steve Vest, the publisher, a couple of times and knew he was contemplating the move over here. Basically, it was a short move from Steve and his gang. They had been on St. James Drive for the last few years, just an eight-iron shot from where they’re now located.

So if you’re in the area, stop in and see us and then walk directly across the street to visit Steve and The Kentucky Monthly staff.

Ad agencies give some helpful hints

One of the better programs at the 90th Annual Newspaper Association Managers convention last week featured two advertising agencies guiding us through some issues we (as a press service) and you (as newspapers) are facing.

The two were Ondine Fortune, with Fortune Media in Iowa, and Krista Moore with Jungle Media in Halifax.

Fortune Media handles about $200 million in “advocacy” advertising and no political candidates at all. Jungle Media is a retailer/business ad agency, handling a lot of larger Nova Scotia retailers.

Comments from Ondine about her agency and dealing with newspapers (by the way, Ondine reads newspapers “because I like to hold on to them while reading” and Krista is a newspaper believer but reads them on her computer or tablet):

From Ondine (actual and paraphrased):

• We need to know who is reading the newspaper. We don’t have anyone telling us that or giving us any kind of demographic information about newspaper readers

• Nobody (the public) is asking for direct mail to be sent to their home but direct mail representatives are sitting at the table with candidates, their campaign folks and their ad agencies. Direct mail has all of the analytics to give to the candidate about distribution of materials

And from Krista Moore (actual and paraphrased):

• Innovation is key to our strategy and newspapers are more often not open to any innovative ideas or strategies to help.

• (We beg for) Standardize sizes. This is a major issue and newspapers need to get together and develop standardize sizes for ads. We might have to produce seven to nine different sizes of one ad just to get it in newspapers we can to purchase.

• Cost (of ads) vs. reach and frequency does not justify the cost of newspaper space

• Digital. Newspapers are often the only local media offering any kind of digital products

• (As for digital offerings and websites) Smaller newspapers must have up-to-date news content or they aren’t effective. If they keep their news up-to-date, people will go to the website more often. If they don’t keep it current, people aren’t visiting the website as often.

Ondine went a little further. “I’ve never had ONE newspaper call or come by to visit me. Never.” Her agency deals a lot with the Iowa Newspaper Association’s advertising service but as for individual newspapers, she restated that she’s never had one newspaper contact her (personally).

“You (newspapers) have to educate us (agencies) about your newspaper, the effectiveness of newspaper advertising, about circulation, about special sections.”

• As for research, both said it should be fairly recent, within the last three years, and newspapers should constantly update circulation and other demographics. Updating social media (Facebook numbers, etc.) would be of benefit, especially when they credit newspapers with having the best digital ad offerings.

• Use NNA’s (National Newspaper Association’s) recent national research to justify your own research. 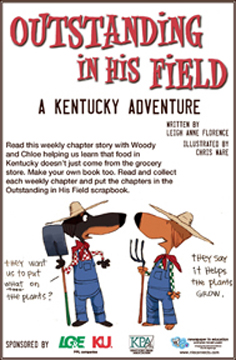 ‘Outstanding in His Field,’

There’s still a few days left to register to publish the 2013 Fall Chapter Series, featuring Kentucky wonder dachshunds Woody and Chloe, though the deadline has passed to reserve scrapbooks. The 10-week series focuses on Kentucky agriculture.

If you haven’t signed up, do so NOW at kypress.com/nie and join another 55 KPA newspapers across the state that will be running the award-winning series.

‘Chicken Soup for the Journalist’s Soul’

(Editor’s Note: With all the stories that have been generated the last few years in Kentucky about child abuse, if you aren’t signed up to receive the regular updates from the Journalism Center on Families and Children, let me recommend it. There are numerous stories about the issue and articles about how to cover stories on children and families.)

By Julie Drizin, Journalism Center on Families and Children

Communications guru Andy Goodman has a clever aphorism that is becoming one of my mantras. Speaking to education activists about how to frame their issues for the public, he explained, “Numbers numb. Jargon jars. Stories get stored in the brain and change minds.”

The purpose of journalism isn’t necessarily to change minds but to open them and inform them. Still, the same rule should apply. Numbers are hard to grasp; they flow in one ear and out the other, but a good story is like a bowl of chicken soup; it has healing powers and the flavors become richer over time.

To read the rest of Julie’s column, go to http://www.journalismcenter.org/resource/“chicken-soup”-journalist’s-soul

Chances are really good that you’ve gotten or will be getting a call from Infintech as the new credit card processor for KPA. Mike Scogin, publisher at the Georgetown News-Graphic, referred Infintech to us and after a few meetings and review of what they offered and how they operated, we were ready to switch. And that move has allowed us to get into online credit card payments more quickly than expected.

So Aaron Luebbers or someone from Infintech might be contacting you, or already has. We hope you’ll take the call and listen to what Infintech can do you for (such as save you some dollars on your credit card processing). It’s not a company using KPA’s name as many will do to get their foot in the door; it’s a company we’re working closely with.

Jim Rickman, my counterpart at the Montana Newspaper Association, called this week to ask if Kentucky would judge MNA’s news and advertising contests in 2015. And in return, Montana would judge ours. I agreed but we decided MNA would just do the Fall Newspaper Contest since the number of entries in doing both KPA contest would burden his newspapers.

We’ll find another state to take on the advertising contest in 2015.

Some links with stories of interest:

Pew: Amid criticism, support for media’s ‘watchdog’ role stands out

ASNE joins effort to protect free speech on the Internet

Except for the KPA/SNPA Publishers Summit August 22 in Shepherdsville, should be in the office next week. There is a chance I might join with other staff members who will be fanning out across the state to deliver the scrapbooks for the Fall Chapter Series but not certain when that will be right on. Otherwise the schedule next week has a couple of interviews for the Statewide Classified coordinator’s position and a telephone with Linda Austin at the Reynolds Journalism Institute about programming for the 2014 KPA Winter Convention.