Baptism by fire? Sounds like Taylor West’s first 2 weeks on the job with Mayfield Messenger 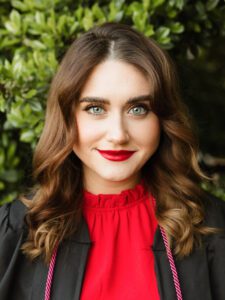 A few days ago, we got a note from Areia Hathcock, general manager at the Mayfield Messenger that they’ve hired a new reporter and she needed a media pass. So we mailed that to the new reporter — Taylor Shea West — last Thursday. It’s doubtful it made it to the Mayfield Post Office before the tornado hit, though possible. We’ve sent her another one just in case it was there and got blown away.

Regardless, knowing Taylor was fresh on the job, I emailed her about Baptism by fire as such. Barely getting on the job and already having to cover the devastation in Western Kentucky, especially in her hometown of Mayfield, and then possibly to follow President Biden around as he and his entourage viewed all the damage.

She did respond Wednesday night that she got to cover President Biden’s visit to her hometown. “I did weasel my way to the front row of press, but only large national TV stations were actually right beside him.”

Here are some questions and Taylor’s response about her first two weeks on the job:

Have you been in the business long?

Not really. Throughout college I wrote for a few online platforms, would help with Murray State News and had general assignments for school. Covering the 2020 election on a local level, and then inauguration, was the last major coverage I did prior to being hired as a full time journalist. After graduation I picked up a few freelancing gigs with court cases, but again, nothing like a constant employed journalist.

I started working at The Mayfield Messenger two weeks ago. I mean, I don’t even have my business cards in yet. I’m new to the job in this sense of things.

What’s your background and if you went to college, then where and what did you major in?

I am 23 years old, and recently graduated this past May. I went to Murray State University and graduated with a Bachelor’s Degree, majoring in Journalism and minoring in Criminal Justice.

The funny thing is, I was never interested in ‘local’ newspaper work until my senior year of college. I really wanted to report on major court cases, social justice issues and on specifics such as mental health – but began to realize to make the impact I truly wanted to in the industry, I had to start on the local level. You have to know your communities that you want to make a true impact on. Later on I realized I wanted to leave a meaningful impact on my hometown before I moved away. That’s where my decision with joining the Messenger came into play.

Are you from the Mayfield area originally or from someplace in Western Kentucky that helped you get interested in working there?

I was born and raised in Mayfield. I went to school through the Graves County school system and graduated from Graves County High School in 2016. I actually wasn’t looking for a (Mayfield) local position at the time. I kept searching in cities that I eventually want to move to, yet never found anything that felt just right. I was beginning to feel down in the sense that maybe I wasn’t prepared enough for the journey I wanted to take and possibly like I didn’t have it in me to bring forth the impact I wanted to. I was made aware of the position in my hometown and it felt right. The decision was easy, and I saw a chance to bring my perspective to the newspaper and possibly bring the community together in ways they hadn’t thought of before.

What are some of the story topics/specifics you’ve done in relation to the tornadoes?

Currently my reporting is all around the current devastation, of course. I’ve been doing the overall information of what happened and resources that are available to our community. I’ve tried to educate, but also not overstimulate everyone all at once. The community has already went through so much, but as our town’s local journalist, it’s my position to make sure we are not only informed currently, but also years from now as well.

I guess a story that I’m currently working on, it’ll be published before this is, would be the one that is really hitting me is covering our downtown churches. Not a week before, the town had an advent walk. Three different churches came together and worshiped for a night at each location before having a dinner together. It’s so special, because that’s only something you truly get to have in a small town like Mayfield. I did a small story about the event and published pictures of these beautiful churches and their sanctuaries, only to be publishing them absolutely demolished the next week.

Honestly, nothing prepares you to have to cover anything like this. I don’t think age is even a factor at this point. I mean, I’m publishing stories and including pictures of the streets that I sat on and watched our holiday parades at as a child. There’s no words to even begin how writing these stories feels.

And if you do get to tour with the President on Wednesday, what are your feelings? Nervous, anxiousness, scared, bold enough just to get near him and introduce yourself? I’d really like the impressions of you learning you might have that assignment, with the President and your reaction when you first heard you might be doing that?

I am nervous, of course, it’s the President. I hope I do get the chance to introduce myself. The circumstances surrounding the situation, I absolutely hate, but I am thankful to be in the position where I am able to do so. There are always doubts, or at least I feel, if you’re prepared enough for big assignments. Though my professors from Murray State, specifically Leigh Wright, has been helping coach me in my doubts while also being supportive of my emotions surrounding my hometown being absolutely flattened. I know she has prepared me during my time at Murray State to complete this assignment like it needs to be done.

When I found out, I was incredibly shocked. I actually had been out of town during the tornado itself, therefore I was already a mess to say the least – trying to find out if my family and friends were safe and what exactly had happened. Of course, none of this was remotely easy due to cell towers being completely out and the internet out as well. On top of this, I am a journalist. When something this devastating happens and you’re relying on what you see nationally and what comes through sporadically by a miracle from a text message, it’s a horrible feeling. My job is to inform and to educate, keeping our townspeople safe. When I found out about the assignment surrounding the President, I was actually in the airport waiting to board, finishing our first story surrounding the tornado to be published when I got the call. Of course as a journalist, I was excited. This is the chance of a lifetime and I’m early into my career, but again like I said before, I just hate the circumstances that surround the assignment itself.