Do you remember On Second Thought from a month or so ago with the pictures of the KPA Board members getting a Behind the Scenes tour at the Kentucky History Center? That’s the one that included some pictures of the Board on tour, in areas not open to the public. And it included being able to “hold” the original Constitution of Kentucky. The Board held its April 18 meeting at the center and the day began with a tour into areas not available to the public.

The tour was a test run as the center had plans to open those areas to the public, on a limited basis, with a tour fee required to those who want to see items from Kentucky’s past that are not on exhibit.

The Kentucky History Center will have the hour-long tour on Saturdays, at 2:30. The cost is $25 per person but $20 for KHC members.

Check with Board members who had the tour back in April. I think each will tell you it’s worth your time and effort to make the tour. Here’s more information about the Beyond the Exhibit. 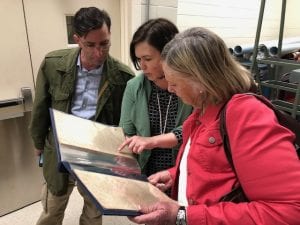 KPA Board members Josh Givens, Carrie Dillard and Regina Catlett look at the original Constitution of Kentucky that is part of the Behind the Scenes tour at the Kentucky history Center. Photo by KPA President Jay Nolan 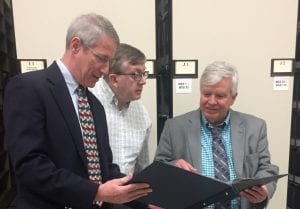 KPA President Jay Nolan, Board member Jeff Moore and KPA Past President John Nelson take a closer look at the original Kentucky Constitution. This came during a “behind the scenes” tour of the Kentucky Historical Society prior to the KPA Board meeting on April 18.