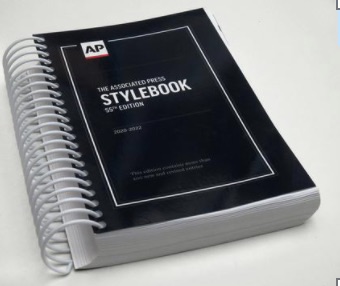 Last Friday, AP Stylebook Editor Paula Froke shared the latest updates to the Associated Press Stylebook, the grammar and usage guide used by newsrooms around the United States. Froke shared the updates and revisions in a virtual panel at the annual conference for ACES: The Society for Editing.

This year’s updates include expanded entries on terms related to Asian Americans. From a press release:

AAPI Asian Americans and Pacific Islanders The acronym is widely used by people within these communities but is not as well known outside of them. Spell out the full term; use AAPI only in direct quotations and explain the term.

Stop AAPI Hate A movement that was launched in March 2020 in response to a rise in anti-Asian bias and racism stemming from the coronavirus pandemic that originated in China. The Asian Pacific Planning and Policy Council, Chinese for Affirmative Action and the Asian American Studies Department of San Francisco State University created a reporting center under the name Stop AAPI Hate to track and respond to cases of hate, violence, harassment and discrimination against Asian Americans and Pacific Islanders in the United States. Some prefer to use the hashtag #StopAsianHate.

anti-Asian sentiment Avoid this euphemism, which conveys little meaning. Alternatives may include anti-Asian bias, anti-Asian harassment, anti-Asian comments, anti-Asian racism or anti-Asian violence, depending on the situation. Be specific and give details about what happened or what someone says happened.

Michelle Ye Hee Lee, the president of the Asian American Journalists Association and a Washington Post reporter, commented on the changes, which she noted former AAJA national officer and AP editor Pia Sarkar worked on.

“The Asian American Journalists Association is pleased and grateful to see terms pertaining to the Asian American and Pacific Islander community updated in and added to the AP Stylebook, the premier style guide for our industry,” she said in an email. “It is crucial that media outlets use thoughtful and intentional language that accurately describes the AAPI community and the AAPI experience … We hope that these efforts to improve media coverage of AAPI communities help bring more visibility to the experiences of our communities and our journalists.”

AAJA also has its own guide to covering Asian America.

Doris Truong, Poynter’s director of training and diversity, said “It’s gratifying to see that AP is continuing to move incrementally forward in recognizing ways that Asian Americans and Pacific Islanders have self-identified for generations,” she said. “I do quibble with this, ‘Asian should not be used as shorthand for Asian American when possible.’ It is always possible to be precise. And it’s worth the additional character count that if you’re referring to someone who is Asian American, you say that, otherwise you’re erasing part of their identity.”

The stylebook also includes revised and expanded entries for disabilities.

According to a press release, the update “includes guidance to use care and precision when writing about disabilities and people with disabilities; ask people how they want to be described; be specific about types of the type of disability, or symptoms; and avoid using disability-related words lightly or in unrelated situations and writing that implies ableism.”

“I’m so pleased that the Associated Press has expanded its guidance on language choices related to disability,” said Kristin Gilger, director of The National Center on Disability and Journalism at Arizona State University, in an email. “It’s not just a matter of being respectful or inclusive, although those things are important, it’s also a matter of living up to our responsibility to report accurately on the nearly 20 percent of Americans who live with some kind of disability.”

The National Center on Disability and Journalism also has a disability language style guide.

“I applaud AP for its expanded guidance about covering disabilities,” Poynter’s Truong said. “Language that puts the person and their humanity first should always be our goal as journalists.”

In 2019, the stylebook revised its entry on racism. In 2020, it endorsed the use of capital B Black when talking about people, ethnicity and culture.

Some other new entries, which can now be found in the Stylebook’s online version, include:

Because of the pandemic, the stylebook has been updated multiple times in the last year, Poynter’s Angela Fu previously reported.

“I think it’s safe to say that yes, there’s never been a pace or number of so many updates so quickly, at least since I’ve been around the stylebook,” Froke said in that story.

If you have a printed copy of the Associated Press Stylebook, even the 2020 edition, you’re out of date. In fact, if you haven’t looked at the AP stylebook online since April 23, you’re already out of date.

At this time of year, the AP usually announces some of its more important style changes at the annual conference of ACES: The Society for Editing. Those changes would often cause a stir, because they would be intended for that year’s print stylebook and would first appear in the online stylebook after the ACES announcement. (Full disclosure: this columnist is a member of the ACES executive committee.)

But, as with so much else these days, things are different. No new AP print edition will appear this year: as AP said last year, it is switching publication of the print book to every other year, and it will not include every entry.
By Merrill Perlman, Columbia Journalism Review | Read moren