A bill that would shroud future projects like Frankfort’s Capital Plaza redevelopment in an extra layer of secrecy has moved a step toward passage.

Following an, at times, spirited debate on the virtues of transparency in government and necessity of secrecy in procurement, members of the House Committee on State Government on Thursday sent House Bill 216 to the full chamber for consideration.

The committee vote split 11-6 along party lines, with Democrats opposing the bill and Republicans generally supporting it, though Rep. Scott Wells, R-West Liberty, elected to “pass” and Rep. Phil Moffett, R-Louisville, qualified his “yes” by adding that there was “a lot to not like” about the bill. 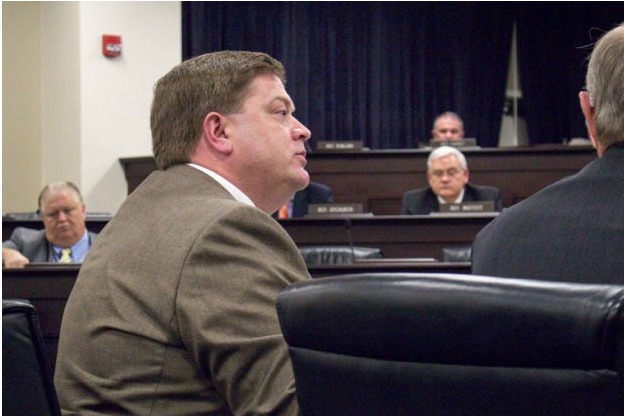 House Bill 216, sponsored by state Rep. Jason Petrie, R-Elkton, would amend Kentucky’s Open Meetings Act to exempt committees that award “built-to-suit” contracts, a type of public-private partnership, from its requirements. The bill would also amend Kentucky’s Open Records Act to conceal the identities of committee members as well as records of the procurement process until after a contract is awarded.

The matter is central to a lawsuit that the Finance and Administration Cabinet filed against a State Journal reporter in November. In that case, the cabinet is seeking to overturn an attorney general’s decision that concluded such committees — in particular, the committee charged with selecting a developer to demolish and replace the Capital Plaza Tower — are subject to the Kentucky Open Meetings Act.

The State Journal filed a formal appeal with the Attorney General’s Office in September after the newspaper’s repeated requests for copies of meeting schedules, minutes and other records identifying members of the Capital Plaza redevelopment project’s Built-to-Suit Selection Committee were denied. The subsequent decision, signed by Attorney General Andy Beshear and Assistant Attorney General Matt James, said, “Finance does not provide any valid legal reason for the Committee not to comply with the Open Meetings Act.”

On Thursday, Petrie and new Finance and Administration Cabinet General Counsel Brett Nolan argued that the bill would simply write into law what has become the agency’s standard practice when dealing with such projects.

“Longstanding practice is that that’s not been an issue,” Petrie said of concealing the identities of selection committee members as well as the location of their meetings.

The cabinet has previously argued that an “overbroad interpretation” of the Open Meetings Act could “undermine the confidentiality of the procurement process by exposing evaluation team members to great risk of improper contact, lobbying, and public opinion pressure, especially when a procurement is the subject of strong community opinions.”

“Upon the award of any public solicitation, the Finance and Administration Cabinet has always maintained a longstanding practice of releasing almost all records related to the award, inclusive of all bids, composition of any evaluation team, bid score, and the final terms agreed to,” the cabinet wrote in its suit.

On Thursday, Rep. Jim Wayne, D-Louisville, proposed amending the bill to simply bar bidders from communicating “ex parte,” or off the public record, with committee members.

“I think that’s helpful,” Petrie said in response. “That goes a step further … . But it also doesn’t get rid of that outside influence of somebody writing an article or seeding information to plant an article.”

“But that’s democracy, Rep. Petrie,” Wayne said. “I mean, freedom of the press.”

“Freedom of the press is not complete either,” replied Petrie, adding that reporters don’t have access to grand jury hearings or sequestered juries.

Speaking in favor of the bill during a public comment period was Associated General Contractors of Kentucky spokesman Ron Wolf, who argued that maintaining the secrecy of selection committee members protects his group’s members from the accusation of having undue influence.

Kentucky Press Association attorney Ashley Pack and Bluegrass Institute President Jim Waters spoke in opposition to it, with Pack calling secrecy the “exact opposite way to deal with improper influence” and Waters describing information’s value as being, in part, a function of time.

“The value of ensuring compliance with the requirements imposed by Chapter 56 exists at every stage of the process, not just when it’s concluded,” said Waters, referencing the statutes that define the built-to-suit process. “So we believe the formation of public policy is public business.”

Calling transparency in government and press access the “foundation on which we are built,” local state Rep. Derrick Graham, D-Frankfort, added a moment a levity following the conservative think tank leader’s remarks.