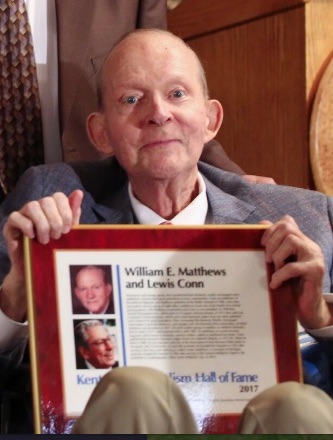 Bill Matthews displays the Kentucky Journalism Hall of Fame plaque he received during his induction on April 28.

Bill Matthews, who with Lewis Conn is credited with the formation of Newspapers Inc., passed away last Saturday.

Bill and Lewis were inducted together in the Kentucky Journalism Hall of Fame on Friday, April 28. Lewis was inducted posthumously.

Visitation for Bill Matthews is tonight (Friday) from 4-8 PM at Shannon’s funeral home and the graveside service is at 11 AM at Grove Hill Cemetery. No funeral services.

Bill’s obituary is listed below, courtesy of Shannon’s Funeral Home.

William E. Matthews, 87, son of Robert F. and Zerelda B. Matthews, died on Saturday, May 13 in Louisville.

Born in Finchville, on April 30, 1930, Matthews was a 1948 graduate of Shelbyville High School and a 1952 graduate of the University of Michigan.

He had a varied career, spending 11 years in the CIA, being a newspaper publisher or editor for 51 years, and appearing in two movies, as an umpire in A League of Their Own and a reporter in Soul of the Game. He also published or co-published several books, including Kentucky’s Civil War 1861-1865, Portrait of the Past, A Pictorial History of Shelby County Kentucky, 1865-1980, A Living History, Shelby County, Kentucky 2011, Historic Kentucky Postcard Card Art 1890-2013, and Editor, Actor, Ballplayer, Spy which addressed his adventures and memories over a lifetime. He originated The Reds Alert in 1973, the first nationally circulated weekly sports magazine featuring a major league sports team (The Cincinnati Reds). He was named Citizen of the Year for the City of Shelbyville in 2015 and was a 2017 inductee into the University of Kentucky Journalism Hall of Fame. That induction took place Friday, April 28, two weeks before Bill’s death.

Matthews was perhaps the only Kentuckian who, while serving with the CIA, was actively involved in the Hungarian Revolution (1956), the Bay of Pigs (1961) and the Cuban Missile Crisis (1962)

A Graveside service will be 11 a.m. Saturday, May 20 at Grove Hill Cemetery in Shelbyville. Visitation is 4 to 8 p.m. Friday at the Shannon Funeral Home.

Expressions of sympathy may be made to the First Christian Church General Fund.