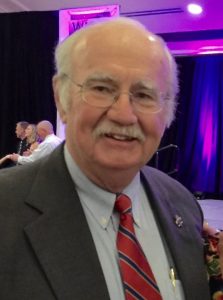 The Tom Hammond Kentucky Sports Media Award has been awarded to Billy Reed. He joins past winners Jennie Rees, Larry Vaught and Dick Gabriel, Mike Battaglia, Donna Brothers and Kenny Rice. The Mt. Sterling native has spent the better part of 40 years covering major sporting events around the country for such publications as the Courier-Journal, the Lexington Herald-Leader, Sports Illustrated, Basketball Times, and the Churchill Downs website.

At age 16, Reed went to work for the Lexington Herald-Leader for a six-year span. By the time he was a senior in college, he was the assistant sports editor before moving on to an opportunity at the Courier-Journal in Louisville in 1966. Reed went on to work for Sports Illustrated in New York where he spent four years before returning to the Courier as a special projects writer. The first special project was to investigate the thoroughbred racing industry for which he received national recognition. Reed returned to sports writing and was the sports editor for the Courier from 1977-86 and was a senior writer for Sports Illustrated for 30 years. He’s worked as an adjunct professor at Indiana University and was an executive scholar in residence at Georgetown College.

“Billy Reed has spent his lifetime writing about sports both in our state and nationally,” said Hammond. “He has established himself as one of the most accomplished journalists in Kentucky’s history.”