Blakeley leaving The Independent as publisher 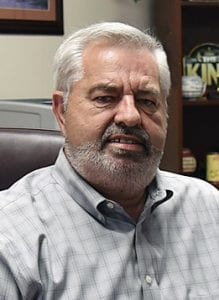 CNHI, LLC, parent company of The Independent, said it was grateful for Blakeley’s fine stewardship of the paper, and that a successor publisher would be appointed soon.

Blakeley also serves as publisher of CNHI’s weekly Grayson Journal Enquirer, the Greenup News-Times, the Olive Hill Times and the Morehead News. For years, he was a CNHI senior vice president and division manager responsible for several newspapers. He has also served as a State At-Large KPA Board member in 2018.

“Eddie has been an accomplished executive for CNHI in Ashland and across the company,” said Steve McPhaul, CNHI’s executive vice president for newspapers. “We wish him the very best in his new job.”

Blakeley started in the newspaper business at age 8 as a youth carrier for The Philadelphia Inquirer in Somerdale, New Jersey, where his father was a circulation district manager. He began working in the mailroom at age 18 at the Texas City Daily Sun, and from there went on to work for newspapers in Texas, Colorado, Arkansas, Louisiana and Kentucky.

“It has been a very satisfying career over the years,” said Blakeley. “But my greatest experience was right here in Ashland, where my kids grew up and where the newspaper staff took pride in what it accomplished every day.”

Blakeley praised his colleagues at The Independent for making the paper one of Kentucky’s foremost small dailies in print and online. His tenure at the paper saw it move aggressively from print into the digital world.

“The newspaper industry has undergone significant changes in recent years,” he said. “The Independent and CNHI have been rewarded by adjusting quickly and keeping up with the evolving needs of the audience with relevant news and advertising content.”

Blakeley said quality news and editorial content were vital to the importance of The Independent to the community, citing the recent coverage of Boyd County Jailer Joe Burchett, who awaits trial on a charge of malfeasance or neglect by a county officer, and the in-depth reporting on Rowan County Clerk Kim Davis, who attracted national attention three years ago when she defied a federal court order to issue marriage licenses to same-sex couples.

“This is what community newspapers do best,” said Blakeley. “They provide information that readers can trust and rely on for fairness and accuracy.”

As for the future, Blakeley said he looks forward to helping grow Journal Inc., which owns and operates the Northeast Mississippi Daily Journal in Tupelo, eight weekly papers in Mississippi, a business publication and printing plants in Mississippi and other states.