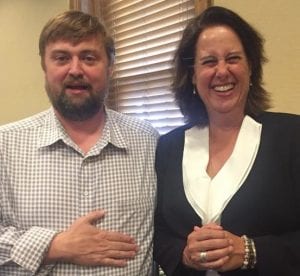 KPA President Ryan Craig with Focus Plan facilitator Jeannie Brewer after her presentation at the KPA Fall Board Retreat. Photo by Teresa Revlett

The project KPA President Ryan Craig chose for his term as the head of the organization was to followup on the 2008-10 KPA Strategic Plan. That was a very involved, wide-ranging look at KPA and where it wanted to be in the future.

Instead of doing another time-consuming Strategic Plan, the Board accepted recommendations that it do a Focus Plan instead, with a concentration on three areas that would benefit the KPA members as well as the organization itself.

The Executive Committee decided to focus on Technology, Advertising and Government Relations.

It hired Jeannie Brewer of Lexington as the facilitator, held several conference calls to lay the groundwork then set the facilitator free to complete the project. That included weekly meetings or conference calls and a survey of members, staff, Associates and friends. The process started in late Spring and a draft of the Focus Plan was presented to the Board at its retreat last week.

There are a couple of areas that KPA will begin work on in the next few weeks but for the most part, the plan takes place throughout 2018 and then culminates in January, 2019. That will include a reception at the Winter Convention as KPA celebrates its 150th anniversary.

The link to the Focus Plan will be put on the KPA website — www.kypress.com — and we’ll discuss aspects of the plan in the coming weeks through On Second Thought. For now, if you’re interested in reviewing the recommendations and the results of the survey, here is a pdf of the plan as presented to the Board.