Last week’s story about the bomb threat appearing on a printer at Southeast Printing in London wasn’t unique. While there were no other businesses in Kentucky reporting such an incident, there were several reports in other states.

An identical message to the one received at London appeared in Portland, TN; in Wisconsin; in Lincolnton, NC; and even in Hawaii, as well as a few other states.

The messages were identical and pretty straight forward:

“Good Morning, I’ll be brief. I installed several explosives in the building. If you do not send in the amount of $25,000 by May 31st I will blow up this whole block. If you try to contact the police, I’ll know. I also have access to your computers and email addresses. Go to the nearest Western Union agency and send the amount to Emerson Eduardo Rodrigues Setim. The passport number is FO645170. It’s a brazilian passport. The city that the money will be withdraw is Chicago, Illinois, USA. Do as I say and no one will get hurt. P.S. I repeat if you try to contact the police I will known.”

Meanwhile, Lexington police have reported numerous vandalism acts over the last month and one included shattered windows at the Lexington Herald-Leader building.

Here’s a story on kentucky.com today about the spree. 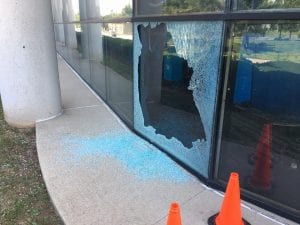 One of the shattered windows at the Herald-Leader Building in Lexington.

Lexington police are investigating a rash of vandalism involving BB and pellet guns, with more than 40 reports of cars, homes and businesses being damaged since May 14.

More than half of the incidents occurred in the downtown area of Lexington, but smaller clusters of damage were reported in areas including Georgetown Road near Highlands Park, according to a list of reports provided by Lexington police. Overall, 41 reports of suspected vandalism involving BB or pellet guns were taken in less than four weeks.

At least 23 privately owned vehicles, 11 residential buildings, five businesses, one school and one school bus were damaged, according to the reports. One man was struck by a BB on Maple Avenue on May 18.

Windows of the Lexington Herald-Leader building were shattered in two separate incidents, with damage discovered May 29 and again June 6. Police said they found evidence that the damage was caused by a BB gun and that juveniles might have been involved. Investigators continue to follow potential leads in that case.

The Herald-Leader cases might be connected to some of the other recent vandalism incidents, police Sgt. Jervis Middleton said. As of Thursday, no charges have been filed in any of the 41 cases.

“We are working diligently to produce suspects for those. We encourage the public to come forward with any additional information related to these crimes,” Middleton said.

Newby’s Economy Glass Service Inc. off Magnolia Avenue has seen an increase in vandalism-related repairs in the past three or four weeks, owner Mike Newby said.

“It’s more vandalism, not necessarily break-ins, just driving by and shooting the windows out,” Newby said. He also said most of the recent damage appeared to be consistent with breaks caused by BB guns or pellet guns.

In several cases, the damage has been to tempered safety glass, which crumbles when struck.

Newby said his business has been called to 10 vandalism repairs in the past week alone.

“I’d like to solve the problem,” he said. “It puts a damper on our schedule. It’s a lot of extra work that you’re not prepared for. It’s caused a lot of rescheduling problems for our business and other businesses, I’m sure.”

Anyone with information about any of the vandalism cases is asked to call police at 859-258-3600.

Anonymous tips, including photos and videos, can be submitted by texting LEXPD plus the tip to 274637. Information can also be sent anonymously through Bluegrass Crime Stoppers at 859-253-2020 or Bluegrasscrimestoppers.com.