(Editor’s Note: For all reporters out there who cover, may cover or have need to reference it, please note it is the Kentucky School Boards Association. KSBA represents more than one school board, therefore boards is the plural in using the name of the organization. You’ll see one of Brad’s biggest frustrations is the media not getting the name correct.)

Chances are really good that if you’ve covered education — local primary or secondary schools, or school board meetings — over the last 24 years, you’ve dealt with Brad Hughes. 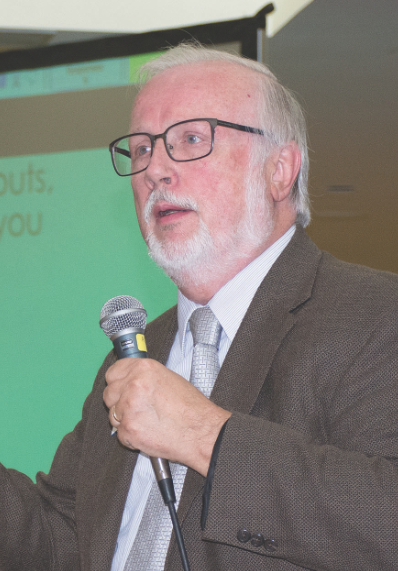 Now after 24 years as director of Member Support/Communications Services for the Kentucky School Boards Association, Brad has announced his retirement effective June 30.

Whenever a newspaper reporter called me asking a question related to schools, school boards or about the policy on taking pictures of school children while on school property, Brad was the person I always turned to. I knew I was going to get an answer, an explanation of the policy and an invitation to have the reporter contact him if there were further questions. And it was going to be in a true professional manner.

Brad has been the consummate media relations person to deal with, probably all tied to his background as a reporter himself. He knew what reporters sometime faced in doing their jobs and he was more than willing to help them as much as possible.

His 24 years with KSBA followed 10 years in a similar capacity with the Cabinet for Human Resources (today, the Cabinet for Health and Family Services) where he averaged 250 media interviews a week.

You can see he got started back in the “Dark(room) Ages” because in talking about some of the changes he has seen over his career, he mentions having to develop film and using a manual typewriter. (For those younger journalists out there, manual typewriters had no electricity.)

OST: I asked Brad about changes he has noticed in the media, and the way the news about school boards and education in general has been handled?

BH: There are so few education beat reporters today in Kentucky. Combine that with the turnover of reporters who cover schools in many communities, and you have young journalists who are trying to explain extremely complicated education issues, sometimes with – but sadly too often without – the collaboration of local educators. Clearly there are many more media outlets that are no longer bound by a publication or broadcast deadline to post their stories online. A small number of media outlets are doing instant reporting from school board meetings, which I think is great in the cases when the reporters understand what they are hearing and tweeting/posting without the time to ask “What does that mean?” Unfortunately, it’s very easy when listening to a complex presentation on an education matter, not fully understanding what was said, what was meant, and then putting the information out. I’m a big promoter of social media use by schools and government agencies. I wish every school board member use social media to communicate with constituents – as long as they don’t see that as an alternative to working with mainstream reporters and their readers, viewers and listeners.

BH: Well, there are multiple themes. There is a huge lack of understanding how media outlets really work, why this makes “news” and that doesn’t. Everyone loves positive coverage, but many people – school leaders included – tend to remember the negative stories. Turnover – both in terms of school leaders and reporters – works against building trusting relationships. School officials in communities with multiple public school systems and a single newspaper are constantly doing a comparison of coverage – perceived positive versus negative, features, news release pickups, sports stories, standalone photos. And not enough public school systems have dedicated communications.

I’m blessed to be able to teach a lot of classes on media relations to public officials and agency staff around Kentucky and several times a year in other states. I often wear a t-shirt from the Newseum in Washington, D.C. imprinted with the message, “Trust me. I’m a reporter.” And I try to use those 44 years as a journalist – 10 as a mainstream journalist and 34 in what I call ‘public affairs journalism’ – to increase understanding about how news is gathered, about professionalism and credibility needing to be earned by both sides of an official/journalist relationship, and how to deal with mistakes on both sides. Errors happen but can be reduced when a superintendent or board member or district spokesperson makes it known that they are willing to take a call anytime to clarify. I hope I can continue to do this kind of training for many years to come with KSBA and other groups. On a really good day, a superintendent, board member or principal mentions remembering my training about creating a message or avoiding “No comment,” and I’m on top of the world.

All that said, I see about 200 education stories a week, and sometimes I just stare at the computer screen, wondering “What?” The vast majority of stories in Kentucky newspapers are well-written. But I find too many that leave me wondering who failed to ask a question or to offer an explanation. I’ve come to learn that a story that’s either flat out wrong, partially in error or just confusing can be just as much to blame on the side of the information provider as on that of the story writer.

OST: When Brad took the position with KSBA, he was the perfect choice. Can you imagine putting an educator in a position of dealing with the media on a daily basis? That’s why one of Brad’s observations (2) is so on point:

1)      Relationships – not friendships – are crucial between local officials and local journalists. There always will be another story.

2)      The best public affairs people have been reporters. Having met a deadline, got a clarification, wrote a correction, told a story in limited seconds or copy inches makes all the difference.

3)      Some of the nicest comments I’ve heard since my retirement became public came from reporters and editors I’ve worked with for years – even a few for decades. It proves point No. 1.

4)      Being married to one of the best newspaper reporters I ever competed against and hands down the finest copy editor I’ve ever worked makes me a debtor to journalism for the rest of my life.

OST: And 4) led to the obvious question: Has Judy (his wife) given you a list of “Honey Do” jobs now that you’re getting close to retirement?

BH: When Judy isn’t helping University of Louisville researchers and reporters who need an expert on this topic or that issue, she’s an incredible basket weaver. Two-time Grand Champion of the Kentucky State Fair. She hasn’t created a Honey Do list, but mine includes being her “Reed Roady” for weaving classes around the country.

I’ve appreciated the working relationship with Brad, going back to the days he was communications director for the state cabinet. Whatever we were discussing, whatever question I needed to ask him to help a newspaper reporter, Brad was always the same. Mild-mannered, professional and understanding.