Branding high school football: Good for the community, good for the bottom line 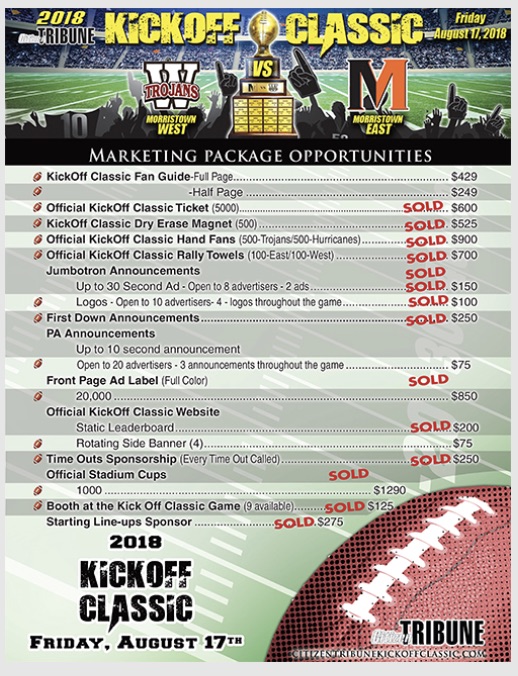 Attach the newspaper’s name and brand to the local high school football rivalry game, and you have the Citizen Tribune Kickoff Classic in Morristown, Tenn.

The two high schools serving Morristown and Hamblen County, the East Hurricanes and the West Trojans, play the game, sell the tickets and provide the concessions. The Citizen Tribune sells everything else, from souvenirs to Jumbotron ads to time-out sponsorships.

“They play anyway. We just make it a much bigger deal,” said Mike Walker, sales and marketing director for the paper.

Attendance is generally about 7,000.

The game, also known as the City Championship, used to be played later in the season. Eleven years ago, Walker said, Citizen Tribune executives approached the public school system about creating the Kickoff Classic. It helped that Mike Fishman, a vice president and member of the family that owns the paper, had played for one of the schools and was an active booster.

“Being the community newspaper here, we have a really good relationship with the school system,” Walker said.

Last year the newspaper pulled in about $21,000 in revenue.  It sells ads or sponsorships for the fan guide distributed in the paper and at the game, its website, starting line-ups, stadium cups, rally towels, first-down announcements, booths and more.

The Citizen Tribune also puts on a halftime fan football toss through a tire (from a local tire company, of course) and a field-goal kicking contest. Before the Kickoff Classic there’s a National Anthem contest in which entrants upload audition recordings to the paper’s website and the public votes on the top 10. Judges pick a winner to sing at the game. Cash prizes go to the contest winner.

Another promotion is the “best seats in the house.” Two recliners with team emblems on them are given away.

This year’s game is Aug. 23. The Citizen Tribune hopes to add a partnership sponsor for $5,000, Walker said. Also in the planning stage is a celebration of the 50th anniversary of Morristown’s one and only state championship, won by East High School in 1969.

Walker said someone who played for that championship team was spearheading the observance of the anniversary and approached him asking for ideas of how to go about it. This year’s Classic will include recognition of all the team members anyone can find, and a special tab commemorating the team to go in the paper and handed out at the game.

All of this branding takes planning, and everything connected with such an event must be approved by school athletic directors, the local school system and the state secondary schools athletic association, Walker said. The paper must abide by all the rules of the state association. Pre-game and halftime on-field events must be scheduled down to the minute so as not to disrupt the game itself.

Walker recommends that papers considering a similar event begin a year in advance because all of the necessary approvals must be secured before the sales staff can start selling sponsorships. These days, the Citizen Tribune is able to start planning the event in April, but that’s because, “We’ve got it down to a science,” he said.

The Kickoff Classic has become a community event beyond a high school football game, even a big game.

“You’ve got to get your program together,” Walker said. “Know what opportunities are out there to go to sponsors, to create the excitement. We build a lot of fun around the game.”

Jane Nicholes is a regular contributor to the Southern Newspaper Publishers Association’s eBulletin and is a freelance writer and editor based in coastal Alabama. She is an award-winning veteran of more than 30 years in the newspaper business. Reach her at jbnicholes@att.net.