Brandon Cox returning to Kentucky as publisher of the New Era 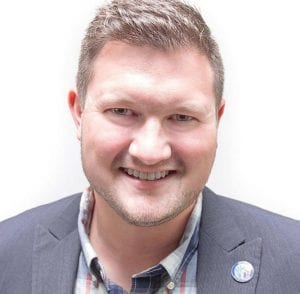 Brandon Cox is returning to Kentucky, leaving his role as publisher of the Jackson County (Alabama) Sentinel for a post in his home state of Kentucky.

“Since 2009, I have worked with those whose mission it is to speak truth to power, build up the people, places and ideas around them and foster the identities of the communities they serve,” said Cox. “I’ve had the unique privilege to do that important work in Kentucky, Indiana, Michigan, Texas and Alabama.”

“I have loved every minute of my time here in northeast Alabama,” said Cox. “My two young children relocated to Kentucky earlier this year, and this opportunity will allow me to be much more than a weekend dad while still doing the work I am so passionate about – building up communities through local journalism.”

He began his newspaper career with Paxton Media Group as a graphic artist after graduating from Kentucky Wesleyan College in nearby Owensboro, Ky. After some work in advertising design and editorial page design with the Messenger-Inquirer in Owensboro, Ky. he moved to advertising sales and later became advertising director at the Courier-Times in New Castle, Ind.

Cox joined Southern Newspapers, Inc. in June 2014 as publisher of the Bay City Tribune in Bay City, Texas before assuming the role of publisher of the Sentinel in September 2017. Brandon was recently elected to the Alabama Press Association Board of Directors, a seat he’ll have to give up to return to Kentucky.