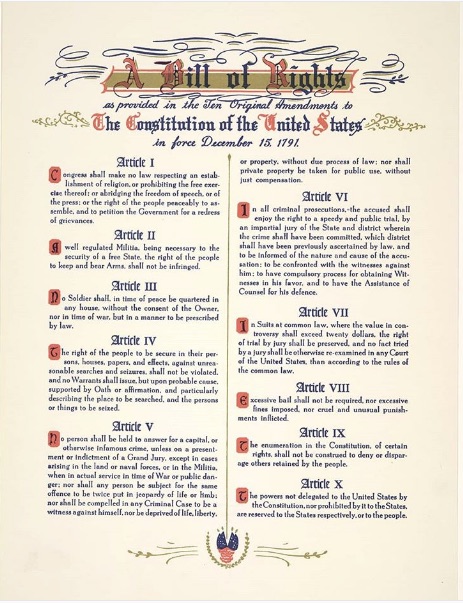 Today is Bill of Rights Day, celebrated today because on December 15, 1781, Virginia became the last state to ratify the document.

Of course, the First Amendment is the one that’s special to the news media because it guarantees Freedom of the Press. But the first 10 list restrictions on government power.

Congress shall make no law respecting an establishment of religion, or prohibiting the free exercise thereof; or abridging the freedom of speech, or of the press; or the right of the people peaceably to assemble, and to petition the Government for a redress of grievances.

From the Bill of Rights Institute:

The first 10 amendments to the Constitution make up the Bill of Rights. Written by James Madison in response to calls from several states for greater constitutional protection for individual liberties, the Bill of Rights lists specific prohibitions on governmental power. The Virginia Declaration of Rights, written by George Mason, strongly influenced Madison.

Madison, then a member of the U.S. House of Representatives, went through the Constitution itself, making changes where he thought most appropriate. But several Representatives, led by Roger Sherman, objected that Congress had no authority to change the wording of the Constitution itself. Therefore, Madison’s changes were presented as a list of amendments that would follow Article VII.

The House approved 17 amendments. Of these 17, the Senate approved 12. Those 12 were sent to the states for approval in August of 1789. Of those 12, 10 were quickly approved (or, ratified). Virginia’s legislature became the last to ratify the amendments on December 15, 1791.

The Bill of Rights is a list of limits on government power. For example, what the Founders saw as the natural right of individuals to speak and worship freely was protected by the First Amendment’s prohibitions on Congress from making laws establishing a religion or abridging freedom of speech. For another example, the natural right to be free from unreasonable government intrusion in one’s home was safeguarded by the Fourth Amendment’s warrant requirements.

Other precursors to the Bill of Rights include English documents such as the Magna Carta, the Petition of Right, the English Bill of Rights, and the Massachusetts Body of Liberties.