They claim it’s to save money, but we know better. Their true aim is to punish newspapers for tough reporting.

All things considered, it has been a pretty good year for public notice.

PNRC (the Public Notice Resource Center) has been tracking about 150 separate bills introduced in 2017 or carried over from the previous year that relate to public notice. Most would have curtailed newspaper notice in some way, but 21 percent would have created additional notice requirements. To be sure, all of the latter addressed narrow circumstances like relocating the contents of a grave or tomb in Florida, or granting flood control district easements without public auction in Arizona. Nevertheless, it’s a clear sign that many public 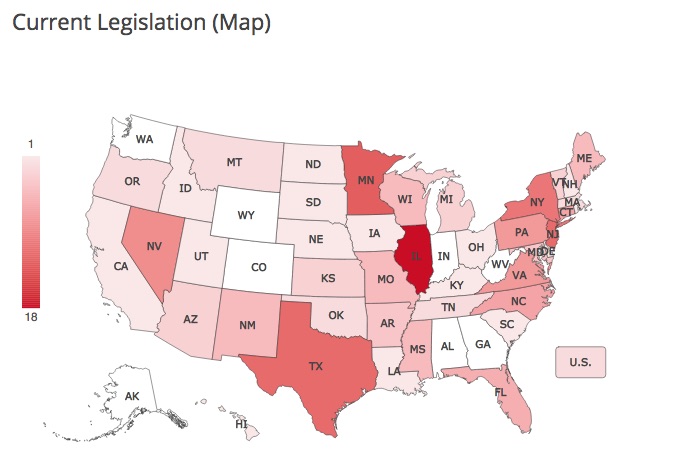 Map showing states where Public Notice advertising popped up in 2017. Illinois (dark red had the most with 18). States the color of Kentucky had only 1. Others variations of the color had between 2 and 12 bills introduced in their legislatures.

Nine of the bills seeking to add new newspaper notice requirements were enacted, including the new laws in Florida and Arizona cited above. Michigan went one step further and adjusted the rates for all court-ordered notices to reflect past and future increases in the Consumer Price Index.

On the negative side of the ledger, 22 states considered legislation that would have eliminated or substantially reduced all newspaper notice. Most of those bills would have moved public notice advertising to government websites, but four would have utilized sites hosted by alternative providers — government associations in Oregon, broadcasters in Nevada, law firms in Missouri, and nonprofit news organizations in Vermont. (A bizarre bill in Texas would have moved notices from newspapers to “any other form of media”. We’ll try not to take it personally.)

Despite that onslaught and a few close calls, none of the bills that would have fundamentally altered public notice laws have passed; most never even had a hearing. The only dangerous public notice legislation enacted this year was a bill in North Carolina that authorizes government units in Guilford County to run notices on their own websites or on the county’s website. That high-profile bill was the culmination of what many in North Carolina have characterized as state senator Trudy Wade’s effort to punish her local paper, the Greensboro News & Record.

More than 40 other pieces of legislation would have eliminated newspaper notice in narrowly defined categories. Only eight of those bills were signed into law, including one that moves school district performance reports in Arkansas to government websites, and another that relieves banks in Delaware of the responsibility of publishing newspaper notices before they transfer unclaimed property to the state. Nevada passed a law that waives the newspaper notice requirement for name changes associated with gender transitions. That bill wasn’t opposed by the Nevada Press Association.

Six bills would have revised public notice eligibility requirements for newspapers; two were signed into law. Utah extended public notice eligibility to newspapers that don’t have a periodical permit issued by the U.S. Postal Service, and Illinois revised its notice requirements for jurisdictions that don’t have a newspaper. The Illinois law also made some technical corrections to the statute requiring newspapers to run notices on the Illinois Press Association statewide public notice site. The bill passed with IPA’s support.

Perhaps the most worrying trend in 2017 was an escalation in the willingness of public officials to weaponize their states’ public notice laws to punish newspapers they disagree with. The most prominent examples were Sen. Wade in North Carolina, New Jersey Gov. Chris Christie and Maine Gov. Paul LePage, all of whom loudly promoted bills that would have eliminated newspaper notice in their states. Wade, Christie and LePage are all Republican, and in the past year the GOP has taken the political bloodsport of media bashing to a disturbing new level. Nevertheless, public notice continues to receive perhaps its strongest political support in deeply red states where access to high speed internet is still sparse and publishers tend to have closer relationships with their elected officials.

• Monitored over 150 separate pieces of public notice legislation, including bills in 22 states that would have completely or substantially eliminated newspaper notice (See legislative map)