She is the first female executive editor in the newspaper’s 175-year history. 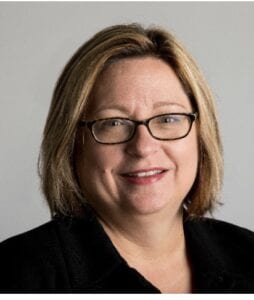 Andrews’ more than two decades-long career as an editor and reporter most recently included serving as a newsroom leader and managing the political reporting team at the Denver Post.

She also has led an award-winning investigative and enterprise reporting team at The Cincinnati Enquirer, where she spent 13 years in a variety of roles.

In her new role, Andrews will also oversee the staff at The Gleaner in nearby Henderson, Kentucky, and will work with staff and editors in news organizations owned by the USA TODAY Network in Southern Indiana, including Bloomington.

Andrews said she and her family are excited about returning to the Midwest.

“I’m a Midwesterner and really excited to get back to the Midwest and learn about Southern Indiana and Evansville,” she said.

Andrews said she believes strongly in learning about a news organization’s audience and what its wants and needs are.

“We are here for the readers,” she said. “Evansville has a strong newsroom already with strong, experienced journalists, and I am very much looking forward to finding ways to continue serving its readers.”

Andrews is a strong advocate of local journalism that keeps its audience’s wants and needs front and center, said Katrice Hardy, the regional editor for USA TODAY Network’s Midwest region and executive editor of IndyStar.

“Cindi’s resume and experiences show how dedicated she is to serving the communities she’s lived in first,” said Hardy. “She’s committed to ensuring that all voices in Evansville and beyond under her purview are heard and listened to and reflected in our news coverage and that no news organization shies away from asking and demanding when it must, answers and transparency for its residents.”

Hardy said Andrews believes a news organization’s most important work is as a watchdog of government, adding that Andrews is experienced with using both public records and database journalism.

Amalie Nash, vice president for local news for the USA TODAY Network, said the company is thrilled to have Andrews back.

“I’ve known Cindi for a number of years and know how dedicated she is to serving readers,” Nash said. “That is never more important than it is right now, as we navigate a pandemic and divisive election.

“Evansville will have an editor who works tirelessly to keep readers informed, who facilitates important dialogue and who ensures local journalism remains a strong bedrock of the community.”