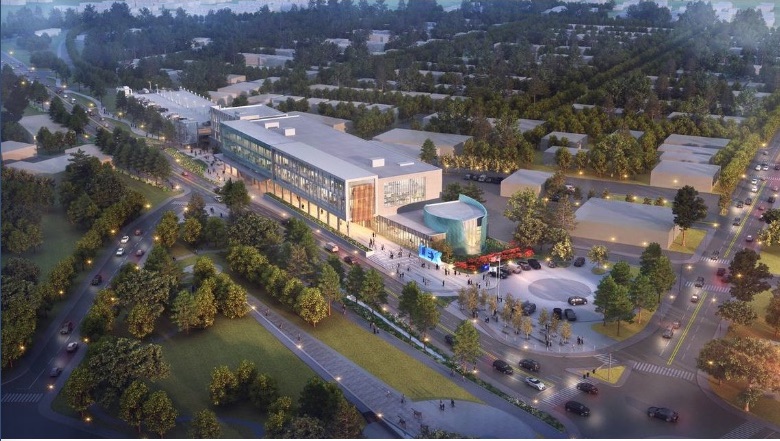 CRM Companies has proposed renovating and expanding the Lexington Herald-Leader building at Main and Midland in downtown Lexington for a new city government building for Lexington. CRM was one of four developers who responded to a request for proposals for a new city hall. EOP Architects

A city committee has selected the Lexington Herald-Leader building as the site of a new government center to replace its aging downtown city buildings on Main Street.

A committee of Lexington city employees chose the proposal by CRM Companies. That proposal is to gut and expand the Herald-Leader building at 100 Midland Avenue for a new city government building. Those plans include adding a multistory parking garage and an addition on the front of the building for a new police station.

CRM Companies has an option to buy the Herald-Leader building.

The selection was announced at a Lexington-Fayette Urban County Council meeting Thursday. The city would lease the building no longer than 35 years and own the facility land after those 35 years, said Bill O’Mara, the city’s finance commissioner.

“It shifts the risk to the developer,” said O’Mara of the lease option. “It is listed as a debt but it has a lower impact on our bond financing.”

The committee looked at parking, proposed space efficiency and facility maintenance and management.

“We had four outstanding proposals,” O’Mara said. “CRM had the lowest per square foot cost over 35 year lease. They had a fixed price for 35 years. They proposed up to 800-space parking garage.”

The annual lease would be $5.1 million a year, O’Mara said. The city currently spends about $2.42 million to run its five downtown government buildings. That means it would cost an additional $2.6 million to lease the Herald-Leader building.

CRM’s proposal would be to move all the employees in five city buildings into the building on Midland.

However, the city could sell the Phoenix building, the former Lafayette Hotel and the county clerk and police station buildings, which could raise additional money for the move.

There’s still a question on whether the city will have the money in future years to move into new digs. There is no money in the proposed budget for the fiscal year that begins July 1 for a new city hall. Sally Hamilton, the city’s chief administrative officer, has previously said that if the city decides to move, those costs would be in future year’s budgets.

The council did not make a decision about the proposal during Thursday’s meeting.

Vice Mayor Steve Kay said he would likely schedule additional meetings in the future to discuss the various proposals.

Some council members said during Thursday’s meeting they wanted to know more before making any final decision.

“I’m not ready to vote on a particular group,” said Councilman Fred Brown. “There are just too many questions left unanswered.”

Others said the council should wait until next year, when a new mayor is elected.

“I think the new administration should be discussing this,” said Councilman Richard Moloney. This is Mayor Jim Gray’s final year in office. Moloney and others said they did not like the Midland and Main street location for a new city hall.

Other city council members said they wanted to learn how the CRM proposal scored compared to the other proposals.

Dave Barberie, a lawyer for the city, said that information is typically not available to council members. The city’s bidding rules prohibits the council from knowing that information so it can not influence the work of the selection committee. Barberie said they can provide some information to the council in future meetings.

Todd Slatin, the city’s purchasing director, said the selection committee showed “there was a clear winner.”

The city has debated for more than a decade and spent hundreds of thousands of dollars on consultants to determine whether it should move.

Most recently, the city issued a request for proposals for a new city hall in October and received four detailed responses from developers.

The developers included two local companies: CRM Companies, whose CEO is Craig Turner, and Cowgill Properties, which is helmed by Buddy Cowgill.

The other developers included Municipal Consolidation and Construction and Pure Development. Cowgill had proposed a 180,000 square foot building with a 200-car garage on property Cowgill owns at the corner of Martin Luther King Boulevard and Corral Street.

Municipal Consolidation and Construction had proposed razing the Fayette County Clerk’s downtown office and the Lexington Police Department on the corner of MLK and Main Street and building a new multistory city government building and an attached 160-space parking garage.

Pure Development did not release its drawings to the Herald-Leader prior to the meeting on Thursday.