From the Louisville Courier-Journal

Longtime Courier-Journal reporter Martha Elson — who for decades has been devoted to sharing Louisville’s past and present with readers — was honored on Saturday by neighborhood leaders and community groups who said her work has made the city a “better place to live.” 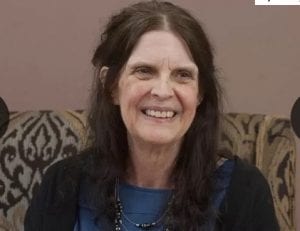 Elson retired last month after 40 years at the Courier-Journal, where she wrote extensively about Louisville’s neighborhoods and the city’s history.

“I don’t think she started her career saying, ‘I’m really going to focus on neighborhoods or beautification or historic preservation,’ yet everyone in the audience today was lauding her for uplifting those issues that are the good news stories that make our hometown so special,” said Melissa Mershon, who sits on the boards of the Peterson-Dumesnil House and the Crescent Hill Community Council.

About 150 people attended the tribute, which took place at the Peterson-Dumesnil house in Crescent Hill, one of Elson’s favorite local historic sites. During the celebration, neighborhood leaders offered proclamations in her honor. The Louisville Historic League announced it would name an award after Elson. Steve Wiser, president of the organization, said the award will likely recognize research and writing on themes like preservation and will be given out for the first time next year. The Crescent Hill Garden Club also announced it will plant a tree in Elson’s honor.

Elson said Saturday afternoon she feels fortunate to have been able to write about historic homes, books about Louisville’s past and other things that interest her. She also said she was overwhelmed by the tribute.

“I just can’t believe how nice everybody was to come out on a Saturday for that and felt fortunate to know so many people who have been helpful to me in writing stories,” Elson said. “There are a lot of people that I know from a lot of different walks of life, and I was just really grateful to get to see everybody.”

Elson’s love of history goes back to her childhood in Oak Ridge, Tennessee, the headquarters of the Manhattan Project during World War II, she once wrote in the Courier-Journal. She went on to minor in history at Duke University and began writing for the Features section of Courier-Journal in 1977. As a longtime Neighborhoods reporter, Elson said, “writing about such areas as the Cherokee Triangle, Butchertown, Germantown, Phoenix Hill and Anchorage, invariably has drawn me to the past.”

In 2014, Elson began sharing her longtime love of Louisville history with readers through the online River City Retro site and a Sunday column called “Celebrating Our History,” which was well-received by readers.

“Martha has a deep passion for Louisville’s neighborhoods and the history behind them,” Courier-Journal News Director Veda Morgan said. “She told the stories that matter to so many in our community. Her vast knowledge of our neighborhoods and her work covering them will be missed.”

After 153 years, Sunday night marks the last ‘start the presses’ for the Courier-JournalSession down to six days but still a lot on their platesFrom Pikeville to Paducah and all points in between, flooding devastates the Bluegrass