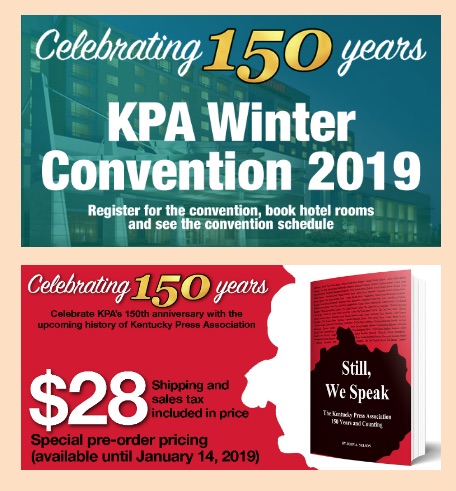 These two links at kypress.com will give you all the information about our 150th Anniversary Convention, January 24-25 at the Marriott East in Louisville as well as “Still, We Speak,” a look back at the first 150 years of KPA, written by Past President John Nelson.

Most everything you need to know about KPA’s 150th Anniversary Convention is available for you right now at www.kypress.com.

There you can register for the convention, as many people as you need; reserve your sleeping rooms directly with the Marriott East in Louisville; and read through the convention schedule itself.

At the top you’ll find the Winter Convention 2019 information and while you’re on the site, click on the “Still, We Speak” link and order your copy(ies) of John Nelson’s look back at the first 150 years of this organization.

Did you know KPA is the nation’s 10th oldest state press association? Wisconsin is the oldest.

West Virginia Press is also celebrating its 150 Anniversary in 2019.

The convention schedule has been slightly tweaked from what you might have seen earlier. So make sure to click on that link for the program schedule.

“Most everything?” What isn’t there and what we are working on are the contest results. Yes the judging is finished but now it’s the process of getting the notifications ready. So you won’t have them before Christmas but figure sometime next week.