Corey Wall, who will be graduating from Eastern Kentucky University in December, is a Kentucky Journalism Foundation intern this summer at the Kentucky Press Association. 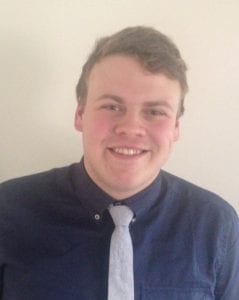 A former computer science major who has switched journalism, Corey will be steering KPA’s website and technology areas as he goes through the 10-week internship.

Corey, a 2014 graduate of Madison Southern High in Richmond, has been features designer, features editor and managing editor of The Eastern Progress while at working toward his degree. He has also received Eastern’s Excellence Award, offered to in-state students for maintaining at least a 3.75 GPA and an ACT of at least 31.

When the KPA Past Presidents selected KPA to have an intern this summer, we knew we wanted someone who could step in to upgrade and update us in all areas of technology and in just his first week he’s proven to be a huge benefit for those areas.

Last fall, we needed someone to take on some assignments in this area and he came highly recommended by Dr. Ginny Whitehouse at Eastern. He helped us then and when we found out we were getting an intern, I was hoping Corey would apply and be available.

As for his plans after graduation, Corey is open. “I don’t have any specific plans, just planning on applying to several places and hoping to get a job that I enjoy. I don’t think I’ll struggle too much, I have a really diverse set of interests and skills so I’ll be happy doing just about anything, I just enjoy working and feeling productive.”