Joel Christopher, a Gannett news executive from Wisconsin, has been named executive editor of the Courier-Journal. Christopher, vice president of USA Today Network-Wisconsin, took over management of digital and print news operations at the CJ, Kentucky’s largest news organization, Dec. 2. 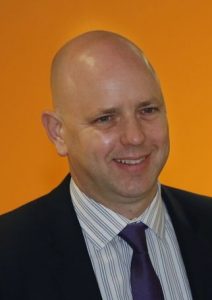 Christopher, 45, said he wasn’t looking for a new job or to leave his native Wisconsin, where he oversaw 10 newsrooms across the state, but he is excited about the possibilities at the CJ.

“You’ve got a newsroom with such a rich legacy,” he said. “This seems like a place where you could put down roots and stay a long time.”

Company President Wes Jackson said he is pleased to have Christopher joining the CJ, which is also part of Gannett’s USA Today Network.

“Joel brings a strong track record of solid news judgment, proven digital audience engagement strategies and a highly engaged style of leadership,” Jackson said. “Through his leadership, our organization will serve our customers with unique, quality journalism online and in print.”

Christopher, who started his journalism career in 1995 as a sports and news reporter in Watertown, Wis., said he expects to be deeply involved in the day-to-day news operations of the CJ.

“I don’t sit in an office,” Christopher said. “I sit in the middle of the newsroom.”

Christopher joined Gannett in 1997 at the Wausau (Wis.) Daily Herald in Wisconsin, where he advanced to become managing editor.

In 2005 he joined The Post-Crescent in Appleton, Wis., as metro editor and became digital editor in 2006. In 2013 he took over digital operations for the network’s 10 newsrooms, and he was named vice president of news in 2014.

Christopher has a bachelor’s in political science from the University of Wisconsin-Madison.

Christopher was named the inaugural state journalist in residence at the University of Wisconsin in 2014. He’s won state and network awards for leading breaking news and enterprise reporting efforts.