From the Courier-Journal: Editor’s Note: Each day during February, Black History Month, The Courier Journal is featuring African Americans who impacted Kentucky. They were chosen by the Kentucky Center for African American Heritage. The center’s goals are to enhance the public’s knowledge about the history, heritage and cultural contributions of African Americans in Kentucky and in the African Diaspora. The center is also a vital, contemporary institution, providing space for exhibitions and performances of all types.

Influential civic rights leader and publisher of the Louisville Defender 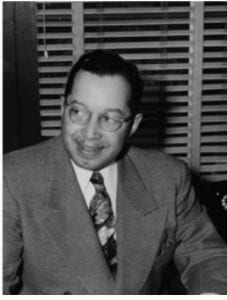 Frank L. Stanley Sr. was an influential civil rights leader as the publisher of The Louisville Defender. (Photo: Courtesy of the Kentucky Center for African American Heritage)

Frank L. Stanley Sr. (1905-1974) was born in Chicago, as the only child of Frank and Helen Stanley. In 1912, Stanley moved with his widowed mother to Louisville, where he attended Central High School in the Russel neighborhood. Central High School was an incubator for him to rise to personify high academic achievement and become an outstanding journalist, educator, athlete, diplomat, politician, business leader and civil rights activist dedicated to community service.

Stanley was an influential civil rights leader as the publisher of The Louisville Defender. Under his editorship, The Defender became Kentucky’s top African American newspaper. He was a crusading editor whose advocacy for racial justice in employment, education, housing and public accommodations and for integrated military units during World War II predated the civil rights movement.

Stanley was received as a leading black publisher by presidents from Harry Truman to Lyndon B. Johnson. Stanley also traveled throughout Africa to conduct journalism seminars, sponsored by the U.S. State Department. Clothe-A-Child and the annual Louisville Black Expo are testimonies to the legacy of Stanley’s commitment to charity and economic development programs.  He was a co-founder of the National Newspaper Publishers Association and a jurist for the Pulitzer Prize award panel.

In 1983, Stanley was inducted into the University of Kentucky’s Journalism Hall of Fame.

At age 14, Alice Dunnigan began writing a weekly column in the Owensboro Messenger-Inquirer 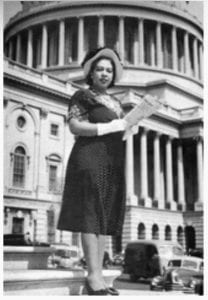 Alice Dunnigan (1906-1983) was born in Russellville, Kentucky in 1906. At age 14, she already had a weekly column in an Owensboro newspaper. Although she wanted to write, she began training at Kentucky State University to become a teacher and began teaching in Todd County in 1924. (Photo: Courtesy of the Kentucky Center for African American Heritage)

Alice Dunnigan (1906-1983) was born in Russellville, Kentucky, in 1906. At age 14, she already had a weekly column in an Owensboro newspaper. Although she wanted to write, she began training at Kentucky State University to become a teacher and began teaching in Todd County in 1924. She continued writing and had articles published in the Louisville Defender and other local newspapers. She wrote stories on local African American families and their interests.

In 1942, she moved to Washington, D.C., and began working for the U.S. Department of Labor. She also became a reporter for The Associated Negro Press. Dunnigan became the first African American female to have a Capitol press pass and the first African American elected to the Women’s National Press Club. In 1948, Dunnigan covered the presidential campaign of Harry Truman. In 1967, she was appointed to the President’s Council on Youth Opportunity, where she worked until she retired in 1971.

In 1974, Dunnigan wrote the story of her life, “A Black Woman’s Experience — From Schoolhouse to White House.” She authored another book in 1982, “The Fascinating Story of Black Kentuckians,” and was inducted into the Kentucky Journalism Hall of Fame.

Dunnigan’s efforts resulted in greater access for African American journalists in every level of government.

Last August, the city of Russellville memorialized Alice with a statue. Here’s a link to the story and a picture of her family around the statue published in On Second Thought and written by Al Cross.

A town with moxie and a history of slavery dedicates a statue of a native, a pioneering black woman journalist