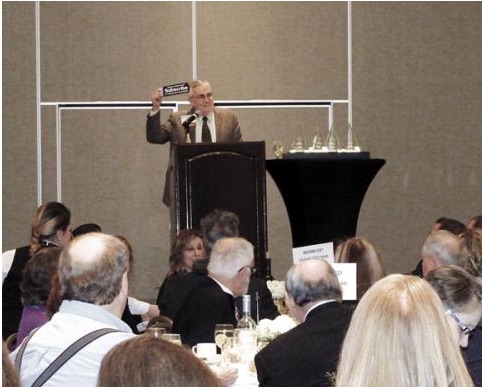 Al Cross shares his philosophy, “Subscribe to independent journalism,” on a bumper sticker as he gives the keynote address during the 2018 Hall of Fame dinner.

Speech by Al Cross, director of the Institute for Rural Journalism, University of Kentucky, at the 2018 TPA Midwinter Conference

First time I’ve been to Galveston, but have been to Texas many times, and always feel at home here; maybe it’s because your state was settled mainly by people from Tennessee, my native state, and Kentucky, my home state.
Y’know, we share a lot of the same sayings: all hat and no cattle (my states are the biggest cattle states in the East), hot as a two-dollar pistol; old as dirt, rough as a cob, cold as a well-digger’s knee (or a certain larger body part). Close enough for government work; handy as a pocket on a shirt; I didn’t just fall off the turnip truck; and he’s one brick shy of a load. Some of my favorites involve animals: rode hard and put up wet; like a duck on a June bug; that dog won’t hunt; fine as frog hair; as independent as a hog on ice; look what the cat drug in; crooked as a dog’s hind leg; if you lie down with dogs, you get up with fleas; even a blind hog finds an acorn now and then; and: there’s more than one way to break a dog from sucking eggs.
I have never figured out what that last one really means, except there’s more than one way to do some things, and different approaches may be needed. And that’s what I want to talk with you about tonight.
When Ed Sterling called to invite me to speak to you, he asked what I would like to talk about, and I immediately replied, “The future of community journalism” – I guess because I wonder about it a good bit, and I’ll bet many of you do, too. Not much is clear, the major exception being that different approaches are needed. Every market, every newspaper, is at least a little bit different, so you must write your own future.
You can’t talk about the future of community journalism without discussing the future of journalism. I think it’s important to remember that we will always have journalism, because we will always need storytellers.
So many times when people say they’re talking about journalism, what they’re really talking about is the news business, which pays for journalism. And the news business is in trouble, because its economic model – mass circulation that drew advertising, which paid 75 to 80 percent of the bills – has been crumbling for more than a decade. Perhaps the best example in the weekly newspaper trade is that if you see a grocery ad in a paper, it’s probably an insert, and those are becoming less common as grocers find other ways to reach customers.

From what I can tell in my own research and discussions around the country, weekly newspapers’ circulation and household penetration, generally speaking, are declining 2 to 5 percent a year, and that trend is not sustainable.
Increasingly, the response to these existential threats has been to live with less revenue but get a bigger share of it from the audience. That’s why paywalls have become common, as newspapers finally discovered that enough people were willing to pay for access. Some community newspaper companies say they want to get 50 percent of their revenue from the audience. They think it can work because there are enough people willing to pay for unlimited access and special benefits for subscribers. It might work in some markets, but I have my doubts when it comes to the smaller, less-well-off markets that community newspapers typically serve.
he idea of getting more revenue from the audience has come more slowly to community journalism, which has been the healthiest part of the traditional news business because it usually doesn’t have competition. You are probably the only reliable, consistent, professional, comprehensive source of news and information for your locality. You probably don’t compete with a television station, and radio news in most places is a ghost of what it once was.
But you are still in competition, with every other source of news and information, for people’s time and attention. There is only so much time the audience can spend with media. It’s more time than it once was, because of smartphones, but those devices are used mainly for social media, not news media.
So you are, for the first time, in a battle with competitors you don’t know or see. And some you may not have even imagined, because local news is becoming less important to some people.