Cross takes off his political columnist hat to campaign publicly 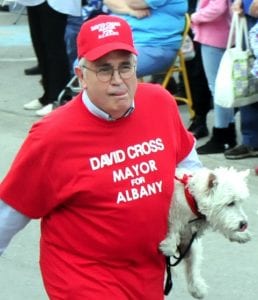 Reporters, political reporters and especially political columnists are encouraged to keep their distance from any semblance of endorsing a candidate. The more involved the columnist is on reporting political news, the more separation from any relationship to campaigning.

Forgive Al Cross, though, if he took off the political columnist hat recently and donned an endorsement hat. He was campaigning in Albany, during the Foothills Festival.

You can see by the picture that Al was marching during the parade, encouraging the crowd to vote for “David Cross for Mayor of Albany.”

Al said David is in a four-way race for mayor of Albany, “and remember that is a non-partisan race,” as if to justify it was ok for him to campaign.

Al is shown with his dog Henry. 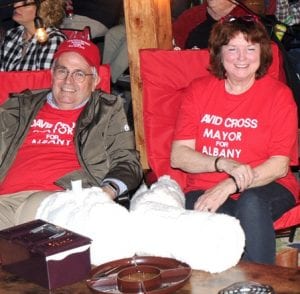 Al and wife Patti listen to the music of Exile after a hard day of campaigning for Al’s brother, David

And in the other photo Al and wife Patti enjoy the evening listening to the music of the band Exile.