More pictures from the trip are available at:

Seven students had the opportunity to study in Washington, D.C. as part of the first CU Away trip offered by Campbellsville University. Students visited various media outlets and locations during their 11-day trip.

“When they see professionals using what we try to teach them out in the field it helps them to understand that there is a real reason for what we try to convey to them during college,” Clark said. 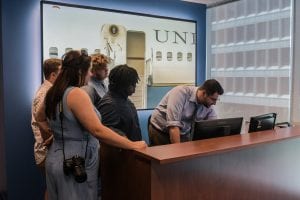 Stan McKinney, lead professor of mass communication and associate professor of journalism, said, “In the classroom you can only go so far. You can’t feel it until you actually do it.”

On their first night of the trip, Sydney Dawson, a friend of Jay Davis, a senior film major of Elizabethtown, Ky., stopped by to talk to them about what he does in and around D.C.

Dawson is the digital communications specialist for the Greater Capital Area Associates of Realtors (GCAAR) and he had advice for the students about working for what they are worth.

“Don’t work for free and get what you can out of it,” Dawson said. He told everyone that while working for free isn’t a bad thing, it is better to get some type of compensation for your work, whether it be monetary or another form such as asking a potential client to pay for a software download in exchange for your work.

Joe Johns, senior Washington correspondent for CNN, met with the group for lunch at Union Station. Johns, who covers the White House and who was Campbellsville University’s Media Appreciation Luncheon speaker in 2018, has been working in Washington since the Clinton administration, and he said it is always changing.

Davis said Johns was one of his favorite media professionals to talk to while in Washington, D.C.

Alexandria Swanger, communications assistant in the Office of University Communications, and class participant, said, “I couldn’t tell you what party he would vote for. He was unbiased, open and respectful to those he worked for even if he disagreed with them. I respect that in a media person, especially from someone in politics.”

Continuing with the on-air representatives, class instructors were able to set up a time for students to meet reporters and tour with Gray Television. Gray Television is the parent company of WBKO in Bowling Green, Ky., WYMT in Hazard, Ky., WAVE3 News in Louisville, Ky. and WKYT in Lexington, Ky.

Students were introduced to the team that works in Washington, D.C. and were given a tour by Ted Fioraliso, senior reporter/executive producer at Gray Television, and Mike Jones, vice president for political sales at Gray Television.

Fioraliso took the group around the station, introduced them to others on the staff such as Kyle Midura, multimedia journalist. The students saw the production studio and finished the tour on the roof of their building, where the Capitol building could be seen.

During their meeting, Fioraliso told students that when they begin looking for a job to cater their resume to the posting because employees will pay attention to that. “Make sure if it’s a producing position that you send them the materials for producing and write your resume to show that you have producing experience,” Fioraliso said.

While visiting with all other staff at the station, Midura left for an assignment at Arlington National Cemetery and took time to show how he is able to operate as a single person news crew. He showed everyone his small go-bag full of his equipment and station mic flags.

Each person at Gray Television is assigned multiple news outlets and serves as the Washington reporter for those places. When Midura left, he told the students he would be shooting the same news clip for all the news outlets he represents.

Murphy said, “They were extremely personable and friendly and weren’t afraid to answer every question we had. I learned a lot from them about news and broadcasting that I had no clue about!”

Terrell, who also is a work-study student in WLCU’s broadcasting station on Campbellsville University’s campus, said, “Seeing their news room, equipment and how they were divided into a team was cool. It was like how we work at the station, and it was nice to see that those in the real-world work like that as well.”

“Having an in-person tour of a station and its reporters proved to be rather enlightening as to what one may expect from such a job as well as a showcase of how much the industry and its members have had to adapt to an ever-evolving news cycle,” van der Meer said.

Joan McKinney, director of the Office of University Communications, said the students on the trip gained an “in” with the media representatives to whom they talked.

“The media representatives told the students how to do it all to gain better attention when they send in resumes. Fioraliso told the students exactly what they should do to get his attention. You can’t get any better than that,” McKinney, said.

CJ Burgess, a senior mass communication area student of Campbellsville, Ky., enjoyed his time with the production team at the Washington Nationals baseball field. “I liked speaking with the guy at the Nationals Stadium. I really think that a job like that would be cool, and I like watching sports — it was the best of both worlds.”

“Every service member has a story and every day I learn a new story.”

During a tour of the Capitol building, CU Away students met with Stephanie Penn, press secretary for Kentucky Sen. and Senate Majority Leader Mitch McConnell. Penn talked to the students about the importance of internships and about how they can connect you to a variety of people.

She interned on Capitol Hill and has since worked her way up to press secretary over the last 10 years.

Penn has worked as a staff assistant for McConnell, in his leadership press office and served as the liaison for the senator’s military academies.

She is responsible for Kentucky media, television and radio and the senator’s social media presence. Meeker said there is “never a dull day.”

One of the last people with whom the group visited was Alan Haven, marketing specialist for the Council for Christian Colleges and Universities. Haven is a 2011 graduate of Campbellsville University and worked at WLCU broadcasting with Clark from 2007 to 2015 before moving to D.C. Haven had lunch with everyone at We, the Pizza in D.C. and talked about his job at both the Washington Nationals as well as the Council for Christian Colleges and Universities.