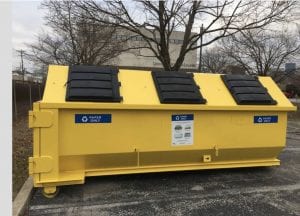 Yellow bins, such as this one in the parking lot behind the former Lexington Herald-Leader, were to be used for recycling newsprint and other paper.

Curbside paper recycling will return to Lexington beginning immediately thanks to a multi-million dollar overhaul of the city’s Thompson Road recycling center.

“We’ve missed the convenience of being able to recycle paper curbside,” said Mayor Linda Gorton at a press conference Thursday announcing the restart of the program. “Now the machinery at the Lexington Recycle Center has undergone a $4.2 million upgrade and we’re ready to go.”

Lexington began overhauling the recycling center in December to make it possible for the city to start processing paper again after suspending curbside paper recycling in May 2019.

Lexington — and many other cities across the country — suspended paper recycling because the product the center produced was too dirty to sell. A lot of recycled paper was purchased by organizations in China, which decided not to take the dirtier paper from the United States and other countries in 2019.The new equipment and upgrades to existing devices now allows the city to:

The cleaner the product the recycling center produces, the easier it is to find a buyer for those materials, city officials have said.

Glass has caused a lot of problems for the recycling center, often cutting and destroying equipment. The overhaul makes it safer and easier for glass to be sorted and recycled. The equipment break downs would often lead to the recycling center shutting down, diverting recycling to the landfill.The Thompson Road center was shut down between December and March for the overhaul. The city paid Rumpke, a private contractor, to haul and process recycled goods.

When curbside paper recycling was suspended in 2019, the city placed multiple yellow recycling bins around town that allowed residents to recycle presorted “clean” paper. The city was able to find a buyer for that presorted cleaner product. Since January 2021, Lexington has collected more than 6,154 tons of paper from the yellow bins, or 324 semi-tractor trailer loads.

The city will continue the yellow bin program for several more months to determine if the bins should remain, Gorton said.

Albright said the city has already secured buyers for the paper product the recycling center has produced. Several new paper mills have started closer to Lexington.

“We think the paper market is starting to come back,” Albright said.

The follow items are now accepted at the recycling center:

*Plastics 1 and 2 bottles jars and jugs with caps on

Angela Poe, a senior program manager for Environmental Quality and Public Works, also urged people not to place any recyclables in bags. Never try to recycle medical waste, garden hoses or strings of lights, she said. All of those items can end up hurting equipment and the employees at the recycling center, Poe said Thursday.

To find out more about what can and cannot be accepted go to: Lexingtonky.gov/recycle