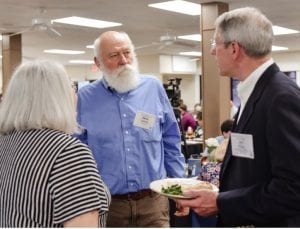 Dave LaBelle, noted photographer, professor, author, storyteller and preacher, was the guest speaker Thursday at Campbellsville University’s Media Appreciation Luncheon. It was the 15th annual luncheon to recognize regional and even state media, a thank you that the news media isn’t offered too often.

Dave began his photojournalism career at the Ventura County (California) Star-Free Press as a weekend sports shooter and lab man while still in high school.

During his 35-year career, LaBelle has worked for 20 newspapers and magazines in nine states, including the Anchorage Times, San Bernardino Sun-Telegram, The Chanute Tribune, Ogden Standard-Examiner, The Sacramento Bee and the Pittsburgh Post-Gazette, where he was assistant managing editor for photography.

LaBelle’s love for feature photography and his ability to hunt out feature ideas has helped him win numerous awards. At 19, he was the National Press Photographers Association Region 10 Photographer of the Year, an honor he repeated the next two years. He was runner-up to W. Eugene Smith for the first Nikon World Understanding award in 1974 and runner-up for the NPPA National Photographer of the Year award in 1979. In 2002, the Photographic Society of America Inc. honored LaBelle with the International Understanding Through Photography award. The award’s judges said, “LaBelle’s background and accomplishments in photography have contributed to greater understanding among people everywhere.”

LaBelle joined the faculty at Western Kentucky University in 1986 and taught photojournalism for more than a decade. In 1989 while at Western, LaBelle published the first edition of “The Great Picture Hunt.”

LaBelle is also the author of the book “Lessons in Death and Life,” which was published in 1992 and deals with the ethics of photographing grief. In 1991, the NPPA honored LaBelle with the Robin F. Garland Award for photojournalism education.