Dave Taylor: Blessed to be in a career he loves, a career ‘that has been very fulfilling’

(Personal Note: If you haven’t been following Dave Taylor’s weekly “What I Learned from Dying” columns, you’ve missed some of the best writing witnessed in many years. Dave, the news editor for the Hancock Clarion in Hawesville and District 3 representative on the KPA Board, found out earlier this year he has Stage 4 esophageal cancer.

(Here’s his first column, from May 7’s On Second Thought that introduced the title of what has become weekly updates on his battle: https://members.kypress.com/articles/what-i-learned-from-dying/

(I can tell you the columns are moving. When the Clarion arrives at the office, Holly, Bonnie and Rachel go right for Dave’s column. They find them moving, humorous, they’ll laugh a little, they’ll smile but often they’re shedding tears by the time they finish reading. Much the same goes for Board members who keep up weekly with Dave sharing his experience.) 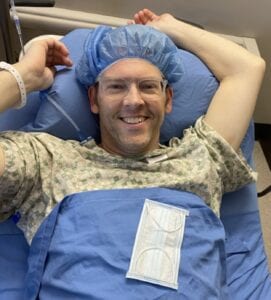 Facing the potential end of your life has a way of making a person look back too, and I’ve been thinking this week about my years in journalism.

I’ve been very blessed to be able to say I’ve had a career that I love and one that has been very fulfilling through the important stories and even a few ridiculous ones.

I’ve met untold numbers of people and gotten to hear and tell their stories. People allow you into their lives like family for the time you’re there and I’ve gotten to experience parts of society and our culture that I never would have otherwise.

From famous people to homeless people, parents of a murder victim and simply interesting characters, I’ve encountered a cross section of society that has taught me a lot about people.

I remember when I was working at a daily paper in Illinois doing five photo assignments per day covering a two-hour radius and I often commented that I couldn’t believe I got paid to do that.

Newspapers have changed just in the 15 or so years I’ve been working at them. At one point video was the next big thing and I found myself shooting and editing several videos per week, and due to time crunches I was often shooting stills and video at the same time and you could hear me taking pictures in my video’s audio. Thankfully those days are long over and I sold my professional high-def video camera years ago.

Over the years I also learned the difference between newspapers and other forms of news media and it taught me that at least in my opinion, newspapers are the most trustworthy source for news because of the code of ethics we’re called to operate by.

Many times I saw TV news come in, tell a subject what to do, get their quick shots and interview and head out, where the ethics of photojournalism and print say we’re not supposed to influence the scene, to the point that most of the time I don’t even turn on lights in dark rooms and I just work with what’s there. And newspapers spend the time to allow a person to tell their real story, not just answer questions based on what someone assumes it is.

Not every story I’ve covered has been important. Once at another paper I had to write a story, photo included, about a hard-boiled egg that cracked open while boiling and the insides cooked to a shape that vaguely resembled a chicken.

But while the stories I’ve covered haven’t always been earth shattering, they’ve been important to the people in those stories and maybe important to those who read them.

At the Clarion we do our best to cover what’s important to the people here because generally speaking, we’re the only ones covering Hancock County at all.

Nowhere else are you going to find pictures of your kids at the fair or an action shot of the homerun your grandson hit in the big game last week.

But we also play the role of local historians. We mark history with every story we write and photo we print. When someone wants information about anything in the past they turn to the newspaper.

I can’t tell you how many times someone has come to the Clarion looking for an old story or old obit and they wind up staying for hours looking through old editions and reminiscing. I’ve gotten caught up just the same when I’m looking for information from old stories.

Since I’ve been fighting cancer I haven’t been able to write nearly as much but I still cherish the paper just as much as ever. I hope to eventually get better enough that I can return to more regular work and office hours but for now this column will have to suffice.

Please continue to read and support the Clarion. It’s the only paper we’ve got.