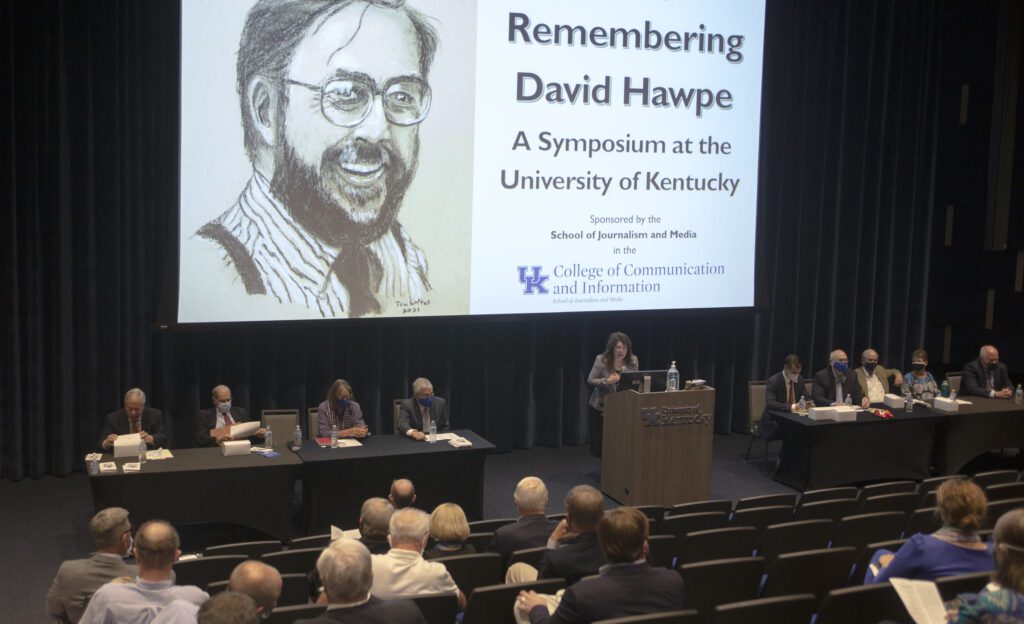 Dr. Erika Engstrom, Director of the UK School of Journalism and Media, welcomes attendees to the symposium remembering David Hawpe, held Friday, September 17 at the University of Kentucky.

The School of Journalism and Media at the University of Kentucky held a memorial symposium, celebrating the life of UK alum and former Board of Trustee member David Hawpe. The event was held Friday, September 17 on the UK campus. Hawpe, who died July 18, was a reporter and editor at the Louisville Courier Journal for almost 40 years. On his watch, the newspaper won four Pulitzer Prizes and was a strong voice for education reform and regulation of the coal industry. After his retirement in 2009, he was a UK trustee for six years. UK President Eli Capilouto joined 11 other speakers who worked with Hawpe to help students, faculty and the public appreciate his impact on the state and the university. “David Hawpe devoted his life to Kentucky,” Capilouto said. “That commitment was particularly evident in his belief that Kentucky needed a strong system of higher education – and a nationally regarded flagship institution – to help our commonwealth reach its potential. As a trustee at two institutions, Morehead State and UK, and as a passionate advocate for higher-education reform, he was unquestionably one of the strongest and most eloquent advocates for how an affordable, accessible system, with outstanding faculty, could transform the state. His role as a trustee was, in an important sense, an extension of his work as a journalist, someone who saw his role as a protector of the state but also someone who pushed it to be even better.” The other speakers were: Stephen J. Ford, who followed Hawpe in The Courier-Journal’s Eastern Kentucky Bureau and was a ranking editor under him for most of their careers at the newspaper. He will give an overview of Hawpe’s career and what it was like to work with him. Richard Wilson, retired C-J reporter and former interim director of the journalism school, will recall Hawpe as the student reporter and editorialist who revealed player discontent on the football team. Mimi Pickering, Appalshop filmmaker and board president of the Appalachian Citizens Law Center, and Steve Cawood, Pineville lawyer who first met Hawpe at the 1970 Hyden mine disaster that killed 38 miners, will discuss Hawpe and the coal industry. Franklin Circuit Judge Phillip Shepherd and state Sen. Morgan McGarvey of Louisville, for whom the retired editor was a volunteer aide, will discuss the politics of David Hawpe, who loved politics about as much as anything. Jon Fleischaker and Kim Greene of Louisville, leading First Amendment lawyers in Kentucky, will discuss what it was like to be Hawpe’s attorney, and some of the battles they won for open government. Betty Winston Baye, former C-J reporter and editor and member of the National Association of Black Journalists Hall of Fame, will discuss Hawpe’s leadership in the advancement of diversity in journalism. David Thompson, executive director of the Kentucky Press Association and Hawpe’s friend of 55 years, will discuss his leadership in the industry as president of KPA and Associated Press Managing Editors.