Through the years memories for Dr. Deborah Givens 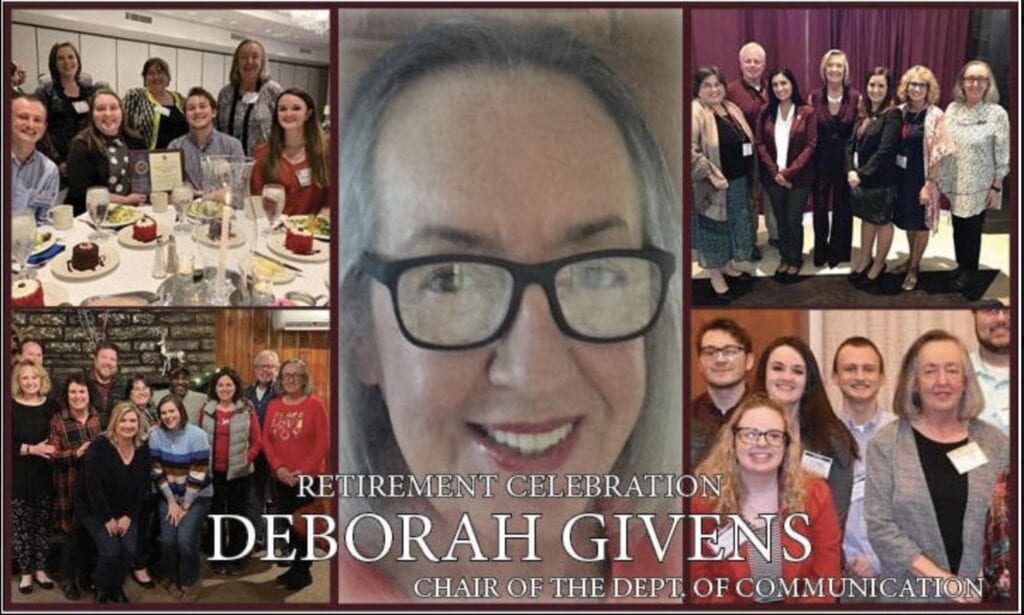 By Zachery Combest, The Eastern Progress

When Department of Communication chair Deborah Givens started at Eastern Kentucky University in 2006, after a long career in the newspaper industry, she found herself building a department and facilities where students can grow and learn while also getting hands-on experience in the fields of journalism, broadcasting and public relations.

“I’ve enjoyed all of the students in the Department of Communication. That’s the best part of the job, is being around students. I always tell people I’ve learned as much from my students as I ever taught them,” Givens said.

Givens said it was important for her to listen and to get to know her students better.

Givens spent the first 11 years as faculty and the last three years at Eastern as the chair of the department.

Even though her journey to higher education took 20 years, she always knew it was her passion.

When Givens attended college at Ball State, her goal was to teach high school journalism, but at graduation she was offered a job at a small newspaper in Kentucky where her family roots were from. Givens accepted the job and worked in the newspaper industry for more than 20 years.

Givens and her husband, Roger, established The Butler County Banner in 1982. They later purchased The Green River Republican and merged the newspapers, which they published until the sale of the company in 1998.

Givens then found herself teaching as an adjunct professor in the Western Kentucky University School of Journalism and then attending the University of Kentucky to pursue her doctorate so she could continue her teaching career.

“I’ve always had that interest in teaching, but it just took me a while,” Givens said.

Sara Zeigler, dean of the College of Letters, Arts and Social Sciences credits Givens for her level of integrity and passion she brought to the department.

“I would describe her as driven, ethical, meticulous and as of one of the hardest working people I know. She’s very insightful and understands people, but she is very determined that things should be done the right way,” Zeigler said.

The Department of Communication has seen major improvements to facilities and classrooms over the past decade under the guidance of Givens.

“She is partially proud of two things, one the improvements to the facilities in Combs, the labs, classrooms and some of the other spaces and she did that with almost no money. She’s also very frugal. She’s good at finding ways to use the resources,” Zeigler said.

Givens said her focus as chair has been to improve the department’s physical appearance and equipment to aid in the students’ learning and educational opportunities.

“Education is changing, technology is changing and all three of our programs, CMS, Public Relations and BEM have had to evolve with that,” she said. “Obviously one of my focuses has been to improve our physical department. In our basic classrooms we have all new tables and nice chairs and all the equipment the faculty needs. All of our labs have been updated… We have to do it at a shoestring sometimes so we’ve had to remodel things and find things in surplus to use.”

Under her leadership at Eastern, the Department of Communication has seen the addition of a podcasting studio, greenscreen studio, new cameras and equipment.

“Deb is good at going out and making those connections with other people,” EKU Communication Studies professor John Strada said. “She sees things that need to be done and she goes out and makes sure they get done. Rather than just saying ‘this would be cool if this happened’ she actually goes and makes the connections so those things actually happen. We see the fruits of that in some of our facilities and some of the connections we have made with outside organizations.”

Strada and Givens have known each other since they attended graduate school at the University of Kentucky and started at EKU together in 2006.

Strada said even before she became the chair of the Department of Communication she was always looking out for people and making sure the faculty had the equipment and resources they needed to do their jobs well.

“Her heart is in the right place,” Strada said. “She wants to do the right thing by people and the same thing professionally. She’s highly organized and efficient in the things that she does. At the end of the day she wants to make sure the right thing gets done.”

Givens has also made it her mission to make the department more welcoming to guests and students.

“We’ve tried to make it more welcoming like adding the monitors that have announcements on them, putting tables and chairs in the hallways so students have a place to study, eat lunch and to talk,” Givens said.

Givens is known for her dedication to her students and passion for student journalism.

Zeigler has seen her passion firsthand and how Givens has supported student media at EKU for many years.

“Everything that she has done has been for the benefits of the students,” Zeigler said. “The other thing that she is really proud of is the achievements she has seen from the Progress staff. That is important to her, that is her baby.”

“I think our student organizations are one of the strengths of our department. PRSSA (Public Relations Student Society of America), SPJ (Society of Professional Journalists) and The Eastern Progress Media Network,” Givens said.

Givens said that one of her most proud moments at EKU was when the SPJ chapter was named the national Campus Program of the Year.

Givens formerly served as the Region 5 director and Board of Directors member for the national Society of Professional Journalists.

She is also proud of all of the internships students in the Department of Communication participate in and the work they do.

Over the years, Givens said that the department has grown their alumni outreach and support, which has helped students receive more opportunities.

Givens has been named an Outstanding Journalism Alumnus for Ball State and was the Outstanding MPA Graduate Student at WKU. At Eastern she has been named a Critical Thinking Teacher of the Year, a Golden Apple teaching award honoree and a Leadership Outside the Classroom award recipient.

After 14 years of educating students at EKU, Givens said farewell to the university on June 30.

During her first two weeks of retirement, Givens spent most of the time moving from Richmond while also spending time with family and enjoying retirement with her husband Roger.

For years, Givens had a quote from Poet Laureate Stanley Kunitz displayed above her desk which said, “I am not yet done with my changes.” Givens said this quote still holds true even in retirement.

Givens is not done with journalism yet as she will serve one more year as the President of the International Society of Weekly Newspaper Editors due to the pandemic canceling this year’s conference and election.

Even in retirement, Givens wants to continue her passion for journalism in any way she can.

“I want to do some writing, some local stuff… do some research, do some projects still,” she said.