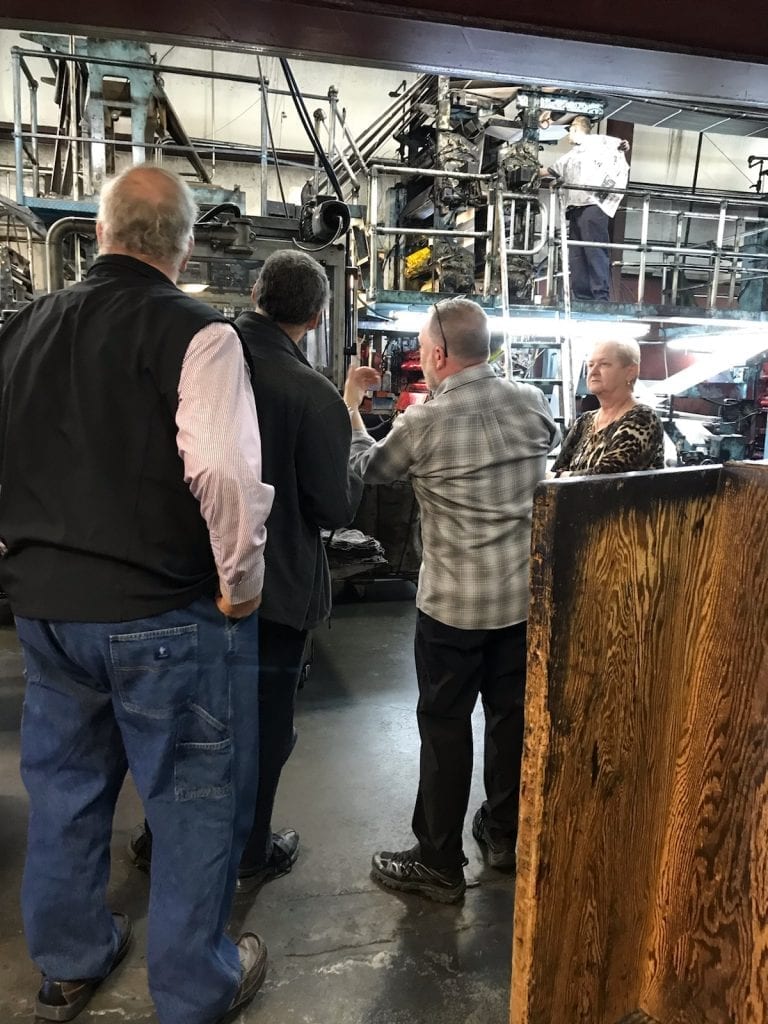 Harrison County Judge Executive Alex Barnett and Cynthiana Mayor James Smith listen as plant manager Josh Guthrie talks about the press run on the Cynthiana Democrat’s special edition. At right is Democrat editor Becky Barnes who came up with the idea of a special edition. For her effort with a special section on COVID and subsequent stories and livestreams, Becky was awarded the Al Smith Award for public service through community journalism. The presentation took place Thursday night.

Cynthiana Democrat Editor Becky Barnes and the journalists at Murray State University’s WKMS-FM were honored last night with the Al Smith Award for public service through community journalism by Kentuckians — Barnes for 2020 and WKMS for 2021.

At the Al Smith Awards Dinner at the Griffin Gate Marriott Resort in Lexington, which was not held last year, keynote speaker Chuck Todd of NBC News cited Barnes and other award winners as examples of local journalism that are essential to rebuilding the credibility of journalism on the national level.

“The credibility of the national media depend on local media, and local media give us more credibility,” said Todd, host of “Meet the Press,” the nation’s longest-running television program, and “MTP Daily” on MSNBC.

In honoring Barnes, the Institute for Rural Journalism and Community Issues and the Bluegrass Chapter of the Society of Professional Journalists cited her 45-year career at the weekly, capped by production of a special edition that reached every household in Harrison County soon after the county had Kentucky’s reported case of Covid-19.

Her initiative was “a groundbreaking piece of work that set an example for rural weeklies,” said Institute Director Al Cross, who noted that many other weeklies did follow her example.

After that, Barnes began livestreaming on Facebook the regular press conferences with the county judge-executive, the mayor of Cynthiana and the county health director, and wrote a column encouraging mask wearing, concluding, “If there is a chance it will help – I will wear a mask – for you.”

Barnes said in accepting the award that the pandemic had roused in her “a sense of urgency” for which she was grateful, while regretting that such a thing was responsible. “I am so humbled for only doing what I thought needed to be done in my community.”

Todd said he understood what Barnes meant about urgency driven by events. With the nation at war over basic facts, he said, “The best you can hope for as a good journalist is that you feel like you’ve informed the public the best that you can, informed the people that make these decisions in our democracy and hope they do the right thing to solve the problems.”

The journalists at WKMS were the first broadcasters to receive the Smith Award. Despite receiving less funding from the university, the station has maintained consistently high quality in its work, uncovering stories such as an investigation into the predatory sexual behavior of a local teacher. “WKMS has the only newsroom that covers the whole region and its interests,” Bluegrass Chapter President Tom Eblen said in presenting the award.

In accepting the award, Station Manager Chad Lampe, who moved up from news director in 2015, said local politics and kingmakers can make the job difficult, but “Rural journalism is truly a community service. It’s incumbent upon all of us to be ambassadors for this work.”

Todd agreed, telling the audience of mainly non-journalists, “If you’re not in journalism, then support it.”

The dinner also saw presentation of the 2021 Tom and Pat Gish Award for courage, integrity and tenacity in rural journalism to the Thompson-High family of Whiteville, N.C., which operated The News Reporter from 1938 until this August and followed high standards, winning a Pulitzer Prize and adapting to the digital era.

Todd cited the family as an example of how journalism should be rebuilt from the ground up. “I’d like to see pride in owning a local news organization,” like owners of sports franchises, he said. “I would be OK if we had a local newspaper be a community trophy for good,” with “a sense of pride” in ownership. “This is where the investment needs to go.”