Back a couple of months ago, I relayed a story in On Second Thought about Lewis County Herald publisher Dennis Brown, and his wife, Tammy, having to be evacuated from the Grand Bahama because of Hurricane Matthew.

He’s added two more stories to that and perhaps forewarned is forearmed. If he invites you on a trip, be prepared for an adventure. 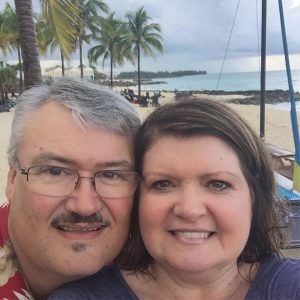 With Tammy as the travel planner, Dennis and Tammy usually get a tour bus together to take a December trip to Chicago or Savannah or New York City. Last weekend’s jaunt was to New York City.

Tammy promotes the trip on Facebook and the first 50 to sign up get a seat on the bus. Though many of the travelers are from Lewis County, Dennis says they’ll attract people from Ohio and other parts of the Bluegrass. “The first 50 to sign up,” he says, “regardless of where they are from.”

The bus left Vanceburg about 6 p.m. last Friday and by 4 a.m., it was most of the way through Pennsylvania. But a really bad accident closed the interstate for three hours. So they sat, many napping, including the bus driver who has had his CDL for only a couple of months. Once they got moving, the travelers were hungry and wanted to freshen up before heading on into “the city.”

“We were in Hellertown, PA.,” says Dennis, “and the name of that town probably should have been an indication.” They found a few little restaurants so the bus driver let a few off at each one with plans to meet up once he got gas.

But the station allowed only $150 at a time so the driver would reach that, drive around the station, go back and do it again. And then made a third stop to finish up the gas.

The police thought what he was doing was suspicious so they stopped the bus as he left after the fill up. They discovered he hadn’t filled out the driving log properly and it appeared he had been on the road since 6 p.m. when he left Vanceburg. That was far more time than the driver is allowed in a single day. And since he didn’t fill out the logbook, it didn’t show he had a three-hour nap while sitting in traffic back down the interstate.

Four police cars escorted the bus to a nearby park where they could talk with the driver more as well as those on the bus. The police agreed to let the driver take the travelers to a nearby casino but that would be the end of his driving for the day. If they caught him driving after 15 minutes, he would be taken to jail.

Being just six or seven miles from the New Jersey border and with 15 minutes to make it there, they made a beeline for the state line and finally made it into the city where the tour group split up to do their shopping and sightseeing, albeit with less time than originally planned.

They had until 11 p.m. Saturday to do as they wanted and then it was time to head back to the Bluegrass. But in the Maryland mountains, they ran into a snow storm and “we just had to crawl through the mountains. There was four inches of snow and even going real slow, the bus was still sliding.”

But they did make it back safely.

Dennis also relayed information about Tammy’s family getting together each Thanksgiving in Gatlinburg, a central location since her family members live in some of the southeast states.

The get-together is in Gatlinburg or was scheduled to be this year. Everyone knows about the devastation the wildfires cause in Sevier County TN and those fires kept Dennis and Tammy’s family away just as all were getting ready to head to the Smokies. That trip is now planned for the spring, perhaps as an Easter gathering.

And we haven’t even gotten to last summer’s Costa Rica trip when the bus nearly slid off a mountain in the rain forest and the driver, speaking only Spanish, had all the riders get to the left side of the bus so it wouldn’t tumble down the mountain.

Dennis and Tammy must be adventuresome travelers.