‘Dog Paddling Across the Bluegrass’; 34 papers have signed up for Fall Chapter Series 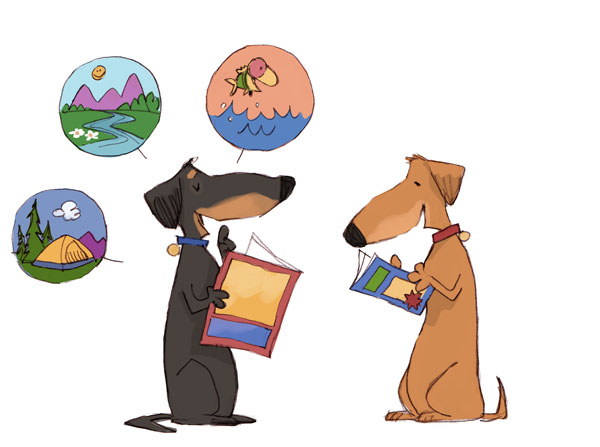 This is not the official artwork for Dog Paddling Across the Bluegrass, but had to have something with the text to break up the gray space.

You’ve probably heard the claims about Kentucky having more shoreline of waterways than any other state. That’s hard to digest because you think of the entire coast of Florida being bordered by water; of Minnesota being the land of 10,000 lakes; and Alaska’s claim that it has more navigable waterways than any of state.

I guess in some way many states lay claim to a title about waterways.

We’ll accept Kentucky’s claim and that’s the basis for the 2017 KPA Fall Chapter Series featuring Woody and Chloe dog paddling across the state. The 10-week series is written by Leigh Anne Florence, our state’s own highly acclaimed author.

Okay, we admit they won’t be dog paddling as such. They’d be two worn out pups by the time they hit the Mississippi River down around Fulton or Hickman. They’ll be traveling instead by boat.

The story is still in the development stage by Leigh Anne and husband Ron have been doing a lot of research. They have also reached out to two of Kentucky’s authorities on rivers, creeks and all things water trying to get additional information for the series.

In Leigh Anne’s own words, here’s how she describes the story line for this year’s series:

“This year our story is titled Dog Paddling Across the Bluegrass and features the pups traveling the state by boat. The purpose is to help our readers become familiar with the different waterways of Kentucky, and also learn concepts such as locks, dams, tributaries, forks, water safety, benefits of water, and the importance of keeping our water clean.”

We have about 35 newspapers signed up for the series, which will probably begin the second week of September.

If your newspaper isn’t listed below, then it’s time to let me know you’ll be running Dog Paddling Across the Bluegrass.

If not, email me at dthompson@kypress.com with the name of the newspaper and paid circulation. As mentioned several times, newspapers will pay two cents per paid copy for the complete 10-week series. That’s a one-time amount, not per week.

Newspapers on board so far include: