Donna Stinnett: from reporter to the Journalism Hall of Fame to her new life as a City Public Information Officer 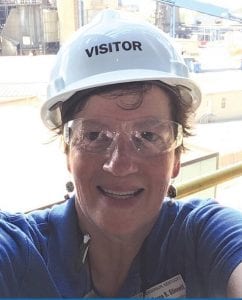 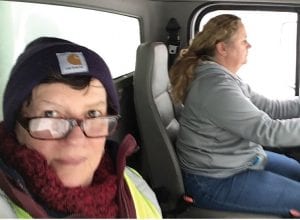 Donna riding along with snowplow driver Bonnie Nunn during a January 12 snowstorm in Henderson.

Donna Stinnett is still going as strong today as she was when she served as a reporter for the Henderson Gleaner. All of that work got her, along with husband Chuck, who was also a Gleaner reporter, inducted into the Kentucky Journalism Hall of Fame in 2016. That was a recognition for her long-time commitment to the newspaper.

Then she retired but that didn’t mean she stopped. And having retired, doesn’t mean she has shorter work days.

KentuckyCity, the publication of the Kentucky League of Cities, has a page in its March/April issue entitled “A Day in the Life.” And it features Donna, her work schedule and shows pictures of her in a fire department training exercise, working on a grant proposal, and riding in a snowplow truck during a January snowstorm. Being out in a snowstorm, or any kind of storm, has never been unusual for Donna. She is a National Weather Service-trained and certified (Skywarn) weather spotter.

Her new walk through life reunites Donna with her former publisher, Steve Austin, who is the Mayor of Henderson. Steve, too, had a long career with The Gleaner, working there for more than 40 years, including 22 as publisher. Steve served as President of KPA in 1988, working his way up the ladder as chair of the KPA Ad Division and then to Treasurer, Vice President and President-elect. And a former Gleaner employee in a key position around Henderson/Henderson County isn’t surprising. Brad Schneider who also was a reporter there when Steve was publisher is now Henderson County Judge Executive.

But the article was about Donna so now back to her.

7:15 a.m. Give invocation at the Legislative Update Breakfast.

9 a.m. Claim a corner of the room for a planning session for a Poverty Summit taking in February at the City’s new Municipal Service Center.

1:10 p.m. Field a follow-up question from the local radio station about the firefighters’ ice rescue training.

1:59 p.m. Talk with a writer for the local daily newspaper about the agenda for the City Commission meeting and specific questions about the city’s alcohol ordinance that would relax restrictions on Sunday sales.

4:15 p.m. Public Works Director calls to report an outbreak of potholes following a major event of winter weather and asks help in notifying the public.

4:45 p.m. Board of Commissioners has brief work session.

4:34 a.m. Receive text with a progress report on the water main break.