Don’t send a correction notice — it really is ‘The Pionier’ 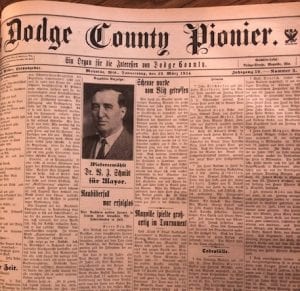 The story in On Second Thought about ‘A Sustainable Path Forward, from President Trump’s Task Force on the USPS’ is going to generate some emails. (See story below.)

I did the same thing when I saw the story Wednesday, notifying an unnamed source with NNA that the first paragraph contained the wrong name for the newspaper. “It’s Pioneer,” I wrote.

Wrong. I got a quick education that indeed “Pionier” is the correct spelling and seems people are constantly trying to correct the spelling. So I reached out to Andrew Johnson, president of the National Newspaper Association and publisher of The Dodge County Pionier, to tell me the story of how that name came about.

“The paper started in 1876 as a German paper since most of the people living in the area spoke German. The word “Pionier” is a military term that means sapper or the engineers that go before the troops. So the newspaper goes before the people of Mayville. The English paper in town was The Mayville News that was started in 1892. Eventually, both papers were owned and operated by the same family for many years. The original “Pioneer” ceased in 1945 and the The Mayville News remained. I purchase The Mayville News and the neighboring weekly, the Horicon Reporter in 1988 and 1989 respectively. After going through a difficult economic downturn in 2008, we lost all of our car dealers except one and many other businesses. It was no longer practical to operate the weeklies separately so we combined them together and brought back the “Pionier” name. The original “Pioneer” covered the entire area and the building we are in was built as the Pionier.”

So now you know and don’t worry about sending that email correction to me.