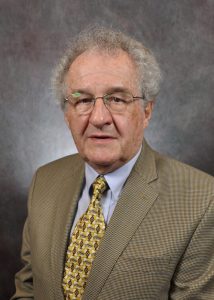 Staats began volunteering with the CFCRB in 2011. He is also a member of the Child Fatality and Near Fatality External Review Panel, a state board that reviews the cases of children who have died or nearly died due to child abuse or neglect. Chief Justice of Kentucky John D. Minton Jr. appointed Staats to the panel in 2015.

He retired from The Associated Press, an international news service, in 2002 after serving 18 years as chief of the AP’s Kentucky bureau. During his 41-year career, he served as a reporter, editor and administrator in 10 offices of the AP and in the AP’s headquarters in New York. He was involved in providing news services to newspapers, broadcast stations, cable TV networks and internet news outlets. He was elected to the Kentucky Journalism Hall of Fame in 2002.

CFCRBs are teams of court-appointed volunteers who review cases of children who are in foster care or other out-of-home care in Kentucky due to dependency, neglect or abuse. The 700-plus volunteers make recommendations to state courts on behalf of the children. Their goal is to ensure that children’s needs are met while in care and that they are placed in safe, permanent homes as quickly as possible.

As chairman, Staats heads the state board’s Executive Committee. The committee meets throughout the year and establishes committees to address various volunteer concerns and improve and maintain the functioning of the review boards. The State CFCRB elects its vice chair and that person moves into the chair position.

“I am excited about Ed’s appointment as state chair,” said Rachel Bingham, who oversees the CFCRB program as executive officer of the Department of Family and Juvenile Services for the Administrative Office of the Courts. “He brings an objective approach to the work we do and has an ability to zero in on details that might otherwise be missed when reviewing these complex cases. His readiness to raise awareness about issues and barriers faced in the foster care system is heartening and I’m looking forward to seeing the impact of his work.”

Staats’ extensive volunteer service with CFCRB includes serving as state treasurer and as vice chairman of the Oldham County CFCRB. He said he is eager to begin his work as chairman.

“I’m focused on helping ensure fairness, safety and a bright future for the children of the commonwealth,” he said.

Staats, who was elected in November, said he wants to introduce implicit bias into the training curriculum for volunteers this year. Volunteers participate in an initial training and annual training to enhance their ability to conduct thorough case reviews and make meaningful recommendations to the courts.

“There are a disproportionate number of minority children in foster care,” Staats said. “The trainings will help volunteers examine how unconscious biases may come into play when making recommendations about cases. We will be looking into the effects of implicit bias on the health and welfare of some of the most vulnerable children in the state. We need to widen the scope of cultural understanding when working with minority youth and families with the hope of improving outcomes for them. I hope to take a leadership role on this critically important topic and work with state agencies and others to implement changes to ensure the best possible outcomes for all children, regardless of race.”

Children in out-of-home care have increased contact with the juvenile justice system, another area where minorities face high disparities and poor outcomes, Staats said. And youth who age out of foster care, meaning they turn 18 without ending up in a permanent home, are at a greater risk of homelessness, incarceration and unemployment than those who get permanent homes, he said.