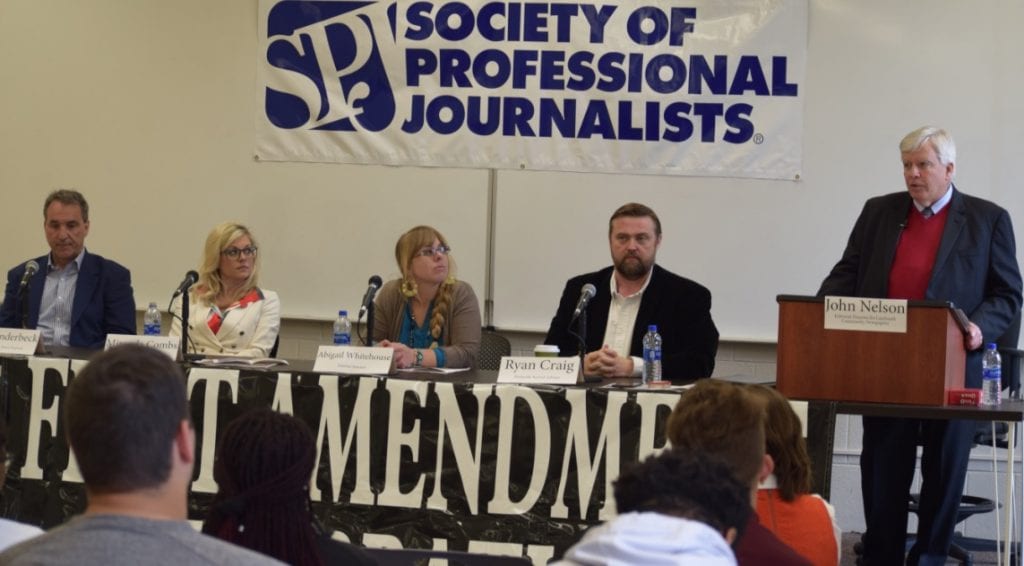 “Guardians of Kentucky” panel took place Monday, April 15. The panel, moderated by Landmark Community Newspapers editorial director and former KPA president John Nelson, included journalists from across the state to talk about threats they received for doing their work.

“I would encourage all of you in this time, when you run into people who think we have too much freedom in the First Amendment, to educate yourselves … about what the First Amendment says — about the fact that it’s not just for (journalists),” Nelson said. “It’s for everyone.”

Panelists included Jeff Vanderbeck, publisher of the Appalachian News-Express; Miranda Combs, investigative reporter for WKYT; Abigail Whitehouse, reporter and editor for the Interior Journal; and Ryan Craig, owner of the Todd County Standard and adviser to the Kentucky Kernel. 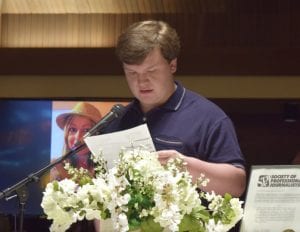 Conner Jones, 21, a senior broadcast and electronic media major from Richmond, Ky., reads a name at the international journalist memorial Tuesday, April 16. Students, faculty and staff read the names of 97 media workers who were killed around the world from 2018 to present day.

Students, faculty and staff participated in a memorial for journalists across the world who were killed while on the job. Participants read 97 names of media professionals killed from 2018 to present day. The event took place days before news broke of Northern Ireland police making arrests in the murder of 29-year-old investigative journalist Lyra McKee.

Sponsors for the week’s events include SPJ; the Eastern Progress Media Network; the International Society of Weekly Newspaper Editors; EKU’s Department of Communication, Department of Government and Office of the President; and the Public Relations Student Society of America.